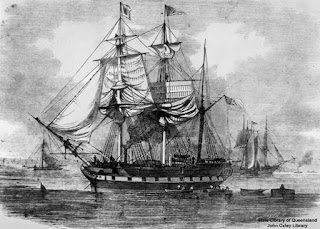 Why were the 1860s the most boring time in history to take a long voyage from England?

"Prior to the 1850s, it was common for ships sailing to India and Australia to stop en route for water and provisions, and many passengers were thankful for the break at Cape Town. In the 1870s, with the advent of the steamship and the opening of the Suez Canal, the journey not only became shorter, it had to be interrupted for frequent coaling stops. But for most of those traveling during the third quarter of the nineteenth century—and only a minority traveled on the celebrated clipper ships—the voyage was made nonstop and out of view of land for almost the entire distance. For those going all the way to Australia, the average journey took one hundred days.

"Additionally, whereas in the seventeenth and eighteenth centuries many voyagers had been thrilled to make natural and scientific observations, by the mid-nineteenth century, most of what there was to identify had been identified – and how much more was there to say about the albatross? In short, by the third quarter of the nineteenth century, oceanic travel had become much more monotonous: it was less dangerous, the route was well known, there were few if any stops, land was rarely in sight, and there was little novelty in seeing birds and fish that had been seen and described before. This routinization of travel parallels the bureaucratization of work."

from "Imperial Boredom" by Jeffrey Auerbach
Posted by Ned Beauman at 10:34 am