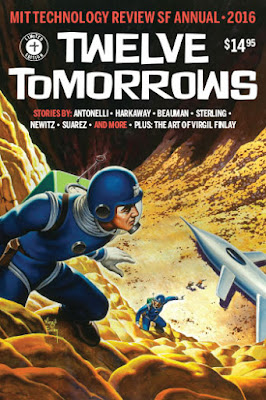 This year's instalment of Twelve Tomorrows, the MIT Technology Review's annual science fiction anthology, includes "It Takes More Muscles to Frown", my cyberpunk story set in the oil industry in near-future Mexico City.
Posted by Ned Beauman at 9:58 am No comments:

Newsreel cameramen in the 1920s:

"The cameramen entered into this scuffling as part of their duties. The competition was so stark that all means were valid to cover the event, or ruin the competitor's work. Some small firms sent saboteurs among the audience in sport stadiums with mirrors to reflect the sun's rays to the authorized newsreel's cameras. Signboards held on poles were pushed up suddenly to obstruct the camera field. Smoke grenades were also used for this purpose. A firm's exclusive coverage was pirated in the most diverse ways. In baseball, football or soccer stadiums, the pirate shots were taken with long focal lenses in strategic spots from nearby buildings or towers. On one occasion, a news firm installed a cameraman inside a water tower opening a hole in it to cover a sporting match because he was not allowed to film it openly. The big firms created a security corps to find pirate cameramen. But many small firms sent several cameramen, so if some were discovered others remained to obtain the coverage."

from Motion Picture Photography: A History, 1891-1960 by By H. Mario Raimondo-Souto
Posted by Ned Beauman at 11:44 am No comments: