"I encountered an impressive contemporary example of detailed oral history in a PaO village two days' walk east of Kalaw in the Burmese Shan states. At the end of the evening meal, a few villagers asked an elderly man to chant the story of U Aung Tha, perhaps the most famous PaO politician after World War II. U Aung Tha was murdered near Taunggyi in 1948 by unknown assailants. The recitation, which I tape-recorded, lasted more than two hours. Far from being the heroic, swashbuckling epic that I had anticipated, it proved, on translation, to be a far more mundane and exceptionally detailed account of the last days of U Aung Tha. It resembled nothing so much as a meticulous police report detailing when Aung Tha arrived in the village, his companions and what they were wearing, the color of his jeep,  whom he spoke to, when he bathed, when several men arrived to ask where they could find him, how they were dressed, the jeep they drove, what they said to Aung Tha's wife, where Aung Tha's body was found, what he was wearing, the identifying ring on his finger, the autopsy findings, and so on. At the end of the recitation, the singer admonished his listeners 'to take the  example of this true story in order to prevent loss or defect in everything.' It was as if every effort had been made, by scrupulously careful oral transmission over half a century, to preserve all the evidence and material facts intact  in case a serious police investigation ever took place! I was also surprised to learn that this singer and others throughout PaO areas were paid to chant this story of U Aung Tha's murder at weddings and feasts. Despite being short on histrionics and long on factual detail, it was a popular and revered story."

from The Art of Not Being Governed: An Anarchist History of Upland Southeast Asia by James C Scott
Posted by Ned Beauman at 3:36 pm No comments:

"In the late 1990s, a number of firms targeted the lucrative market of training young Muslims who were being recruited globally to join radical groups engaged in jihads, or “holy wars” in places such as Chechnya and Afghanistan. For example, Sakina Security Ltd. was a British firm that offered military training and weapons instruction to these recruits, as part of its “Jihad Challenge” package. The teaching included hand-to-hand combat techniques and how to “improvise explosive devices,” both of which had obvious utility in terrorist actions. Sakina was reported to have been affiliated with TransGlobal Security International. This was another British firm, which also reportedly ran military training camps (including teaching the use of machine guns) for radical Muslims. Similarly, Kelvin Smith, an American government employee, ran a side business (based in Western Pennsylvania) that provided military training to groups purporting to be headed to the fighting in Bosnia and Chechnya. The training even involved mock terrorist-type attacks on utilities plants. Smith also purchased assault rifles and thousands of rounds of ammunition on behalf of the clients. Six members of the group trained by Smith later turned out to be members of al Qaeda, who were convicted in 1993 of planning a series of attacks around New York City. Smith, in turn, was sentenced to just two years for violating U.S. gun laws."

from Corporate Warriors: The Rise of the Privatized Military Industry by PW Singer
Posted by Ned Beauman at 3:31 pm No comments:

On Sunday I'm doing an event at the KGB Bar in the East Village with Lars Iyer and Emily St. John Mandel.
Posted by Ned Beauman at 9:00 am No comments:

I wrote something about Beckett for The New Inquiry.
Posted by Ned Beauman at 5:54 pm No comments: 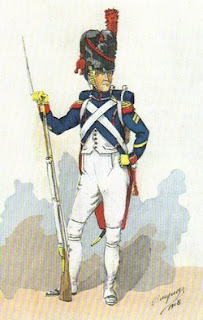 On Friday 10th February I'm speaking at a White Review event about Nicholas Chauvin at the Cabinet space in Brooklyn.
Posted by Ned Beauman at 12:35 pm No comments: