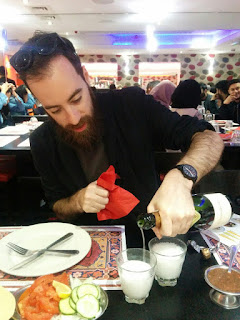 Above: BYOB champagne at Needoo Grill, my favourite restaurant in Whitechapel

Ever since I published my guide to New York – which is now severely out of date, so I wouldn't recommend planning a holiday around it – people have been asking me if I was going to do the same for London. I've scarcely been able to keep up with the requests, which have been coming in at a rate of one, sometimes even two a year.

I wasn't sure about it, though, because I knew I would have less to offer. Firstly, I am not as tireless an explorer of London as I was of New York. Secondly, even when I do venture out, I don't find as much that I like: London is one of the worst cities in the western world to drink in, and although the food there is getting pretty good these days, New York is still way ahead.

However, since the most recent phase of my life in London has just come to a close – I've moved out of Clerkenwell and I'm going to be abroad for several months – I thought I might as well offer a reckoning. So here is a Google Map of my favourite London establishments.

"Favourite" in this case means I've been at least twice (with visits counted across both locations in the case of two sister restaurants, such as Salvation in Noodles or Berber & Q. Further to this topic, I've left off Dishoom, Tonkotsu, Pizza Pilgrims and Franco Manca, because there are so many branches of each they would clog up the map, even though I do endorse them).

There are seven bars on here, but I decided to leave off pubs completely. I have a complicated relationship with pubs – complicated in the sense that I detest them, but I am also an Englishman, which makes that a fraught attitude to go through life with. For the record, the only pubs in London for which I feel any real fondness are the Exmouth Arms, the Scolt Head and the Palm Tree (the last of which is likely to close).
Posted by Ned Beauman at 8:19 pm 1 comment: