In Paul Collins' delightful Banvard's Folly I have just come across the story of Victorian inventor Henry Bessemer, who went to great lengths to protect his steam-powered machine for the manufacture of cheap bronze powder from industrial espionage. It's like something from Pynchon! From his memoirs:

'Up to this juncture the details of my invention and the nature of the several machines used in the process were an absolute secret, and I feared to patent these inventions: firstly, because they might be modified or improved by others, but chiefly because secret machinery could be erected abroad, and the article smuggled into this country without fear of detection, because powder cannot be identified as having been made by any special machinery. Thus, a patent would have afforded no protection whatever to me. Then came the difficult question of continued secrecy; there were powerful machines of many tons in weight to be made; some of them were necessarily very complicated, and somebody must know for whom they were. The result of a review of all these difficulties was this:

Firstly, we both agreed that if brass were still to be sold at a higher price than silver, it would be impossible for us to maintain this price if all the details of my system were shown and described in a patent blue-book, which anyone could buy for six pence. This fact absolutely decided me not to patent the invention.

Secondly, how could we trust workpeople who could have a thousand pounds or so given them at any time for an hour or two's talk with a rival manufacturer? This difficulty we proposed to meet by engaging, at high salaries, my wife's three young brothers, on whom we felt we could entirely rely; so this point was satisfactorily arranged.

Thirdly, how about making these massive machines? What engineers could we trust? -- for any engineer must have such work done in his workshops open to the eyes of all his men.

Fortunately, here I was enabled to step in.I could undertake personally to make, not only all the general plans, but also each of the working drawings, to a large scale, for each of the machines required; and when I had thus devised and settled every machine as a whole, I undertook to dissect it and make separate drawings of each part, accurately figured for dimensions, and to take these separate parts of the several machines and get them made: some in Manchester, some in Glasgow, some in Liverpool, and some in London, so that no engineer could ever guess what these parts of machines were intended to be used for. Of course, I was able to undertake the proper fitting together of all these detached parts after they had arrived in London[...]

After much personal labour and study, this part of the undertaking was accomplished, and the making of all the machines was commenced. Meanwhile, I sought for quiet, unobtrusive premises, with sufficient land to build a factory and engine-house, and on which there was also a dwelling-house for myself and family: for such premises must not be left unguarded either by day or night. In the quiet suburb of St. Pancras I found just what I wanted, viz., an old-fashioned, unostentatious, but comfortable house, lying some distance back from the high road, and having a large garden in the rear. Such was old "Baxter House," the scene of so many experiments, and the birthplace of several entirely new manufactures.

The ground for the factory having been chosen, and a long lease of the premises obtained, I had next to plan the necessary buildings. One or two cardinal points were first determined. A substantial wall was to separate the engine and boiler-house from the factory proper, into which the engine-driver could have no access or connection whatever, except in so far that the shafting from the 20 horse-power engine passed through a stuffing-box in the wall of separation. Access to the engine-house and coal-store was confined to a back entrance leading into another street.

The factory proper was to have but one external door, opening into a large hall, from which all the other rooms were separated by locked doors; there were no windows, except to this one outer room, all light being obtained by means of double skylights, through which no one could look; and these were further secured by impregnable inside sliding shutters. Adjoining the entrance-hall was a washing and dressing-room, as a change of clothes on going in and coming out was imperative.

Then came other important provisions rendered necessary by the fact that the machinery was massive and very heavy, and no labourers or other workmen could be admitted to assist in putting it together and erecting it in its destined place. Concrete foundations and iron bed-plates had been put in wherever necessary, with bolts inserted therein corresponding with bolt-holes in the machine framing then being made. Heavy beams were fixed on the walls crossing over the several places where the weighty machines were to be erected, each beam having stout eye-bolts inserted in it for the purpose of attaching a block-and-tackle for hoisting. In order to facilitate the erection of all this machinery by myself and my three unpractised assistants, I had so divided the large frame castings that no single piece would weigh over ten or fifteen hundredweight.

All the smaller shafts and driving-drums were put in place, the gas and water laid on, and Chubb's safety-locks were affixed to every door before any of the machinery had arrived. The last workman had already departed, and silence reigned supreme in the empty building, into which, from that day forward, for probably twenty years, only five persons ever passed. In such a case secrecy must be absolute to be effective, and although mere vague curiosity induced many persons of my intimate acquaintance to ask to be allowed to just go in and have a peep, I never admitted anyone. Even my own sons were rigidly excluded until they were grown up. When mere lads, if they teased me to let them in, I would sometimes say, "No, you will find much more amusement at the theatres, and to-night you may go if you wish." I need scarcely say that this was greatly preferred.'
Posted by Ned Beauman at 5:56 pm 1 comment: 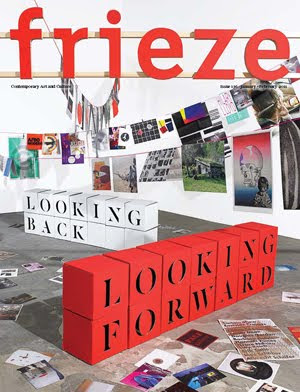 In the new issue of Frieze magazine you'll find my first ever attempt at art criticism, a review of British Art Show 7 which concentrates mostly on Matthew Darbyshire's installation An Exhibition for Modern Living.
Posted by Ned Beauman at 10:10 am No comments:

Last month I was a guest on a new podcast called East Pillage, hosted by Dan Murtha of the band Danimal Kingdom. We talked about Batman, Charles Burns, and indie computer games. It's pretty niche!
Posted by Ned Beauman at 10:17 am No comments:

"The one great personal tragedy of [Edward Page] Mitchell's life was a bizarre accident in 1872, when he was twenty years old. On a train journey from Bowdoin College to Bath, Maine, a hot cinder from the engine's smokestack flew in through the window and struck Mitchell's left eye, blinding it. After several weeks, while doctors attempted to restore this eye's sight, Mitchell's uninjured right eye suddenly underwent sympathetic blindness, rendering him completely sightless. His burnt left eye eventually healed and regained its sight, but his uninjured right eye remained blind. The sightless eye was later removed surgically, and replaced with a prosthetic glass eye."
Posted by Ned Beauman at 1:46 pm 1 comment: