The fifth president of the University of South California was Rufus Bernhard von KleinSmid – a rare and excellent example of the internally capitalised surname.
Posted by Ned Beauman at 6:45 pm 3 comments:

"On one occasion, one of his female assistants travelled by train from his laboratory in Cambridge carrying a canister of poison gas. The canister began to leak in the compartment. She attached it to a piece of string, hung it out of the window and completed her journey to Porton."

Stanley Lovell researching bombs at the Office of Strategic Services:

"Cats, it was suggested to the OSS, always land on their feet, and will go to any lengths to avoid water. Why not wire a cat up to a bomb, and sling both cat and attached high explosive below to a bomber? When flying over enemy sips, the explosive cat would be released. The cat would be so concerned to avoid landing int he water that it could, it was argued, be virtually certain of guiding the bomb onto the deck of enemy warships. Exerpiments with flying cats soon proved to the supporters of the project that even unattached to high explosive, the cat was likely to become unconscious long before Nazi decks seemed an attractive landing place."

both from A Higher Form of Killing by Robert Harris and Jeremy Paxman
Posted by Ned Beauman at 5:46 pm No comments:

I was on the Guardian Books Podcast this week talking about comics with Sarah Crown and Rachel Cooke.
Posted by Ned Beauman at 6:22 pm No comments: 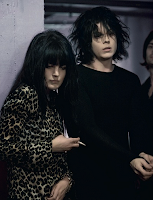 "When you live in a place that you know could be destroyed at any time, it changes the way you think."

In May I flew to New Orleans to interview The Dead Weather (Jack White, Alison Mosshart etc.), and the resulting article is in this month's Dazed & Confused, which has MIA on the cover.
Posted by Ned Beauman at 8:11 am No comments:

Another German interview with me put through Google Translate. I'm described as "the wildest debut of the season", which makes me sound a bit like the flighty daughter of some 1920s aristocrats. Also, here and here are podcasts talking about the book. No idea whether they like it or not.
Posted by Ned Beauman at 10:00 am No comments:

From a paper by Professor Philip Morrison, given at the Communication With Extraterrestrial Intelligence Conference in 1973, about the possible conquences of receiving a message from an alien civilisation:

"A message channel cannot open us to the sort of impact which we have often seen in history once contact is opened between two societies at very different levels of advance. There will be absent across space, of course, any military dominance, whether as in Mexico in the sixteenth century when military dominance from the outside was dependent upon a local alliance, or as in the Canary Islands or in Peru where it was fully external. Nor will there be the thrust of any technical economic competition, like that which induced famine among the highly developed Bengal hand weavers, faced with the machine-made cloth of Manchester. At most, we expose ourselves to the dangers or opportunities faced by the Japanese society on two occasions in its history, once when it encountered the enormously strong culture of the T'ang through a very few persons traveling; or in the nineteenth century when the Japanese system changed entirely after what was only a threatened invasion, but a threat which brought out internal strains that were very deep in Japanese society. So I am confident that on this kind of model, which seems to me very plausible, we could imagine the signal to have great impact - but slowly and soberly mediated, transmitted through all those filter devices of scholars who have to interpret and publish a book, and so forth. Note that the total gloss on Greek thought is at least as voluminous as the Greek texts themselves!"
Posted by Ned Beauman at 4:23 pm 2 comments: