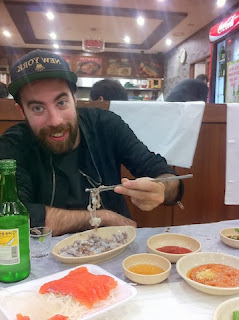 I travelled a lot this year, often for promotional reasons, and I also ate a lot. Here are my favourite restaurants in chronological order (limited to one per city, and leaving out cities where I didn't eat anything notable). This may seem like the document of a life of excess, but please note that only two of these meals cost more than £10.

New York: Xi'an Famous Foods
My spirit shall find eternal happiness in the arms of my lord, my saviour, the first and last, the beginning and the end – Gotham. I have eaten so much good food in this city. And of all the restaurants here, my most beloved is the northwest Chinese fast food chain Xi'an Famous Foods, which has six locations plus a new sister place called Bi'ang. When I was living in a sublet in East Williamsburg for a month in March, I was only ten minutes' walk from the Greenpoint branch, so I ate there several times a week – mostly for $3.50 cumin lamb burgers and $6.50 hand-ripped pork noodles. No, it's not the most refined cooking I've ever eaten, but no other restaurant in the world has come close to giving me, in aggregate, so much joy. Plus, there's the adorable earnestness of the warning on their menus: 'Food tastes best when fresh from the kitchen. When hot noodles cool down, they get bloated, mushy, and oily. If you must take your noodles to go, please at least try the noodles in the store or right out of the to-go containers when it's handed to you, so you can get the best possible Xi'an Famous Foods experience.'

Quemado, New Mexico: nameless barbecue truck
Quemado has a population of about 250. The general store sells souvenir T-shirts that make fun of how sleepy it is. We camped nearby only because Quemado is where the Dia Foundation pick you up to take you to the Lightning Field. And yet, bafflingly, this town is a bit of a food mecca. I had marvellous burgers in two different diners here, plus there's a third which I didn't visit but which is apparently just as good. Above all, we got some of the best barbecue I've ever tasted from a truck parked on Main Street – on the Land Art Road Trip we ate a lot of brisket and ribs, but these won easily. I can't find any reference to the truck on the internet, so I don't know anything more about it. Maybe it was a dream? I realised recently that you're most likely to lose yourself in a meal – really abandon your faculties – when you have to pick up the food with your hands and bring it right up to your face to gnaw on it. If it's good enough, you close your eyes and forget where you are, like a meaty tongue kiss.

Roswell, New Mexico: Henry's Tacos
These were probably the best tacos I've ever eaten. I had three, then went back for two more. My friend only had one. Many people on the trip didn't have any, and never will. We are playthings of an unfeeling universe.

London: Wild Honey
After spending nearly a year away from the city in 2011-12, it was a real shock to come back and find that from nearly anywhere in south London you could now look up at the Shard like a shiv in the gut of the sky. But compared to that, the hyperaccelerated maturation of London restaurant culture in my absence has been as disorienting as about a dozen Shards. Everything's changed! You can find a really good meal pretty easily now! (At least if you're willing to get on the Tube; we're still not at the New York stage where you can be confident of finding one within walking distance in almost any neighbourhood.) For all that, though, the best meal I had in London this year was at a restaurant that opened in 2006. I know 2006 doesn't seem like that long ago, but it is. Just cast your mind back – in 2006, we were all still going to Pizza Express, and we were grateful for it. Order the smoked eel here. Also, try to arrange for someone else to pay.

Delhi: Karim's Hotel
You hear so much about how Anglo-Indian food isn't real Indian food, a lot of the best 'Indian' restaurants in London are actually Pakistani, real Indian food is a lot of vegetables and not much meat etc. that I basically arrived in Delhi expecting to eat nothing but subtle chickpea curries for a week. Sheer blithering ignorance, of course: it's not as if Anglo-Indian food was invented in the 1970s by bureaucrats at the Meat and Livestock Commission. It has a historical basis, and at least some of that, I now know, is Mughlai cuisine. At Karim Hotel I devoured the tandoori chicken like a starving hyena, and although the intensity of the experience must be attributed at least in part to the panic hormones still effervescing in my bloodstream after a high-speed tuktuk ride through Old Delhi at night, I can nevertheless assert objectively that this is one of the world's great meals.

Kathmandu: Newa De Cafe
In Kathmandu Airport there are signs on the walls with facts about the country, one of which observes that the nation of Nepal has never been conquered. When I mentioned this to one of the Nepali literati I met in Kathmandu, he told me that although Nepal has never been conquered from the outside, it's certainly been conquered from the inside: in the eighteenth century, the Ghorkas crushed the Newari people of the Kathmandu Valley. I'd never even heard of the Newari people, let alone Newari food, and between you and me my first thought was that 'the Newari' sound like one of the alien races from Babylon 5. Anyway, it's apparently a 'purer' Nepali cuisine, with fewer Indian influences. I can't describe the chicken and buffalo dishes I ate at Newa de Cafe in any detail – they were strikingly distinct from any other ethnic cuisine I've ever tried – but it was all so good I went three times in three days. This stuff should be ubiquitous. Every market town in England should have several mediocre Newari takeaways.

Seoul: one of the restaurants on Gul Bossam Alley
The Seoul Food Tour section of the Visit Seoul website has twenty sections, hundreds of photos, and its own cartoon mascot. It seems to assume that you, the foreign tourist, are not just interested in Korean food but pathologically obsessed by it. All tourist information websites should be like this. The truth is, before I went to Seoul, I never thought of myself as much of a fan of Korean food, but I now know that Seoul is one of the greatest dining destinations in the world. The highlights were the various 'food alleys', which have a dozen or more small restaurants all specialising in the same dish. Almost every one of them is able to display stills from a TV news feature on its cooks, because the Koreans, unlike the British, think that cheap food prepared by unassuming professionals is important enough to be worth celebrating. I'd only heard of bossam because it was the original, failed premise for David Chang's Momofuku Ssam Bar in the East Village. You wrap up steamed pork, raw oysters and kimchi inside a lettuce leaf, but before you take a bite it's important to put on a protective helmet – you're probably going to have some sort of grand mal seizure because it's so delicious and you might bang your head on something.

Bangkok: open-air buffet around the corner from Chatuchak Market
I love Thai food more than any other cuisine, and I'm happy to trek all the way across London or New York or LA because I've heard a new Isan place has opened under a pub or in a strip mall, but I'd never actually been to Thailand. So after all these years to find myself eating real Thai food in Bangkok was, inevitably, both climax and anticlimax. I was like Jessica Chastain's character at the end of Zero Dark Thirty, when she's spent her entire career tracking Osama Bin Laden from a distance and then she finally gets to touch his corpse and she's so overwhelmed she doesn't know what to feel. Is that a strange analogy? My point is, I've been to the Heron in London and Ayada in Queens and Pok Pok in Brooklyn and Jitlada in LA. I've methodically eaten my through the best (non-fancy) Thai food you can eat in the western hemisphere. I wanted the food in Bangkok to be ten times better than that but most of the time it was only a bit better (which is either an indictment of my dining choices there, or, more optimistically, a tribute to the abilities of the top 0.1% of Thai cooks in the US and the UK). However, there were exceptions: one was the unidentifiable peppercorn-heavy curry I ate on my first morning there, which literally made me weep with happiness, and I wasn't even hungover.
Posted by Ned Beauman at 2:57 pm No comments:

1. I was recently one of the participants in the inaugural year of Gerson Zevi's Land Art Road Trip. We spent a month travelling through Utah, Nevada, New Mexico, Arizona and Texas, staying in motels and campsites, looking at art. There are photos here and here. Some of the unsigned text on the latter blog is by me and some of it is by the White Review's Ben Eastham.

2. Since then, I've appeared as a Granta BoYBN author at Ncell Nepal Literature Festival in Kathmandu, Hay Festival Dhaka, and the Non/Fiction Book Fair in Moscow. I had a great time throughout, so thank you to all my hosts, especially the guys from Lalit magazine for introducing me to Newari food.

3. My contribution to Friday Firsts, the Radio 4 fiction series for authors who've never written for radio before, will be broadcast on January 3rd. It's called "Finding Your Voice" and it's almost gothic and lurid as another story of mine, "Light and Space", which will be published in the Guardian Weekend magazine's Christmas ghost story special on December 21st.

4. One of my favourite bars in New York, Elsa on East 3rd Street, has a new cocktail on its winter menu named after my book Boxer, Beetle, made with blackberry bourbon, rose hip grenadine, lemon, allspice dram and rosemary. If you're in the city over the next few months, go and try it.

5. I am now back in Brooklyn: below, my flatmate's new adoption cat, who because of her colour is only rarely visible against my outfits. 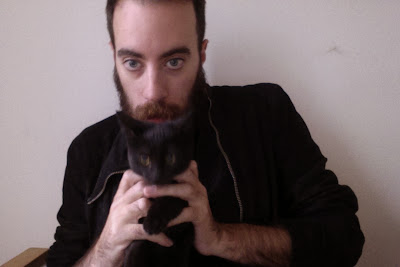 Posted by Ned Beauman at 2:04 pm No comments: