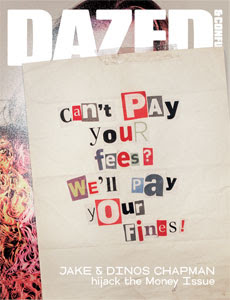 In this month's Dazed & Confused I interview two guys with unusual jobs: John Drengenberg, who tests safes in a laboratory with cutting torches and nitroglycerine, and Wilf Blum, who dives for sunken treasure off the coast of the Dominican Republic. Also jewellery designer Noemi Klein and artists Jennifer Lewandowski and Sam Levack. The whole issue is themed around money – which was sort of my idea! – even the fashion shoots.
Posted by Ned Beauman at 11:21 am No comments:

I'm reading The High Window, Raymond Chandler's third novel. Two years ago I wrote here about how an odd passage in his story "Red Wind" comes across as a little self-referential joke about the conventions of detective fiction – or perhaps not just detective fiction, but literary realism more generally, and the accumulation of surface detail that constitutes the springs in its mattress. There's a comparable bit in The High Window:
'Okay,' I said. 'It wasn't a girl. She had help. It was a man. What did the man look like?'
He pursed his lips and made another steeple with his fingers. 'He was a middle-aged man, heavy set, about five feet seven inches tall and weighing around one hundred and seventy pounds. He said his name was Smith. He wore a blue suit, black shoes, a green tie and shirt, no hat. There was a brown bordered handkerchief in his outer pocket. His hair was dark brown sprinkled with grey. There was a bald patch about the size of a dollar on the crown of his head and a scar about two inches long running down the side of his jaw. On the left side, I think. Yes, on the left side.'
'Not bad,' I said. 'What about the hole in his right sock?'
'I omitted to take his shoes off.'
'Darn careless of you,' I said.
No explanation is given for Mr. Morningstar's eidetic memory. He just happens to be a character who talks like a narrator!
The High Window also contains a few paragraphs about Bunker Hill, at the beginning of Chapter Eight, that rank among Chandler's very best descriptive passages. Reading Chandler after so many decades of Chandler imitators and Chandler parodies, it's sometimes easy to forget that he's not writing about some unreal and self-contained Marloweland, he's writing, brilliantly, about a specific city at a specific time. While researching The Teleportation Accident I've got through a lot about Los Angeles in the 1930s, but there's no non-fiction book that's as useful as Chandler.
Posted by Ned Beauman at 7:44 pm No comments:

From From Nazis to Nasa: The Life of Wernher von Braun by Bob Ward:
'Von Braun's avalanche of fan mail ran the full spectrum. One woman wrote, "I only have one question before I sign off: is it possible for one to attain sexual pleasure from sending up rockets?'... One of the strangest letters, an ominous one, came from a correspondent in Germany claiming to represent a "world-famous rock'n'roll group". All that the band wanted was for von Braun to secretly bring to America a pretty, 14-year-old German girl whom they had marked for stardom as a singer. They would pay him well for his trouble but, if he didn't cooperate, it would be "death for you and your wife".'
Also:
'"It was my suggestion,' Dr Generales recalled years later, "that before he attempted a lunar flight, it might be worthwhile to try it with mice as 'passengers' first. Wernher agreed it was a good idea. And so we found ourselves spinning white mice on a specially mounted bicycle in Wernher's rooms." But disaster struck some of the experiments, as the home-made centrifuge, designed to simulate rocket take-offs, spun faster and faster, the blood of "a number of these unfortunate beasts" was flung against the ceiling of the room – with unpleasantly messy results, as von Braun later reported. "Our... inquisitions were summarily interrupted by my landlady's violent objections to a ring of mouse-blood upon the walls of my otherwise neat Swiss room." Medical student Generales dissected the mice and reported to his space-minded friend that the high acceleration had caused cerebral haemorrhages in the subject animals.'
Posted by Ned Beauman at 11:53 am No comments: