A farcical incident deep in the Honduran rainforest, from Peter Keenagh's travelogue The Mosquito Coast (1938):

Trapp had brought two large canoes full of fresh supplies for us – food and ammunition – with three Zambu boys from Brewer's Lagoon, who had since gone back in one canoe leaving tie other for him. He took us proudly to the hut and showed us the pile of things he had brought. There was flour and rice, sugar, salt and coffee; tinned milk and even butter, and a lot of quinine. In a separate pile, in neat packages, was the ammunition. He probably had great trouble in protecting it lower down the river, for the Honduran Government is very strict about importing ammunition into Mosquitia. For the people who live there it is hard to get and expensive, and here we had a supply probably amounting to more than all the rest of the ammunition in the territory. It had been sent by air from the capital to La Ceiba, from there to the Lagoon by schooner, and now it had been laboriously brought up the Patuca by Robert Trapp. I picked up a large square package that was covered with oilskin wrapping. It was so heavy that I thought it must be .38 revolver ammunition. Nigel had two cartridges left in his belt and I had only one, so I tore away the wrapping to get out a fresh supply before we forgot. The oilskin came away easily, then there was a layer of heavy cartridge paper and wire, and finally two thicknesses of brown paper done up with stout cord. At last the covering was off.

I could not believe my eyes; instead of neat boxes there were books, a large pile of enormous fat volumes. Incredulously I picked them up. Salmond on the Law of Torts by W. T. S. Stallybrass; The Institutes of Justinian; Cheshire's Modern Real Property ; and so on. We looked at each other without a word. There was no adequate remark to make. Instead of valuable ammunition we had been sent law books, as unsuitable a form of literature for the banks of the Patuca river as one can well imagine. Frantically we searched the rest of the cases. There were plenty of shot-gun shells, a box (for some reason) of signal rockets, and finally, at the very bottom, a small box of .38 bullets. It was a relief to find them, but there were very few, and we were disappointed that the first case had not been full of them.

In fury we turned to the books. There was no sense in keeping them, a useless dead weight, if we were going across country to the Guarunta. Disgustedly we hurled them into the river. They floated clumsily down stream, and before they were far from us we saw a ripple on the water and an alligator'ss jaws snapping at the Law of Torts. He must have been as disappointed as we were. As Justinian floated away Nigel in a fit of spite put a bullet through it. Cheshire ran aground on some rocks, where it remained in safety to mock us for several days. The others were whirled away by the current, to find their way into the Lagoons or possibly out to sea. They must have proved a source of enormous enlightenment to the Zambus. Robert Trapp watched us with delight, pleased at the sight of people who apparently shared his own opinion of books.

It took us a long time to find out how those books had reached us. At the end of the summer term in Oxford I had ordered them from Blackwell's ; they had followed me to Tegucigalpa, where someone had put them on an aeroplane going to La Ceiba ; and from there they had made their dogged legal way into the middle of Mosquitia by schooner and canoe. There is no getting away from the law.
Posted by Ned Beauman at 12:46 pm 2 comments:

“I think it cannot be denied that the tendency of the Eton system is to make a boy generous and firm-minded, to exercise his common sense early, to make him habitually feel a moral responsibility, to act not under the impulse of fear, but of generous shame and generous emulation, to be willing and determined to keep trust because he is trusted; – in a word, to make him a manly boy and a gentleman.” – John Taylor Coleridge, 1861

An interesting etymology I found today: to say that something had been "spirited away" didn't originally mean, as you might assume, that something had been whisked away as if by magical spirits. In fact, "spirits" was a slang term for kidnappers who took poor children from the streets of London and shipped them off to work on plantations in the West Indies. The outcry against this led Parliament in 1645 to pass an ordnance against kidnapping children, although the earliest relevant citations in the OED are from decades later:


1666   London Gaz. No. 107/1   Several persons escaped from the Vessel, who pretend they were spirited (as they term it) and invited upon several pretences aboard them, and then..carried away.
a1675   B. Whitelocke Memorials Eng. Affairs (1682) anno 1645 140/1   An Ordinance agains such who are called Spirits, and use to steal away, and take up children.

Finally, in the nineteenth century, the connotation of the phrase began to converge with the non-slang meaning of the word:

c. Said of the action of spirits.

That first citation is a bit ambiguous but fortunately the context can be confirmed on Google Books. "Nay; it soon came to be whispered about, confidentially, in the great chimney corners; among the very old, and very young people, that Peters had been carried off, in a whirlwind; cottage and all; spirited away, in a thunderstorm, such as never was heard of, before – by his Master – the Evil One; or Old One."

I looked up John Neal, the author of Brother Jonathan, on Wikipedia, and found that he sometimes took only a week to write a novel. This productivity earned him the nickname Jehu O'Cataract. "I shall write, as others drink, for exhilaration," he once declared. After three years in London (lodging part of the time with Jeremy Bentham), he returned to his birthplace of Portland, Maine to visit his mother. He hadn't planned to move back there for good, but the local reaction to his writing had been so bad that he was told he wouldn't be allowed to stay even if he wanted to – which made him decide he did want to, and indeed he did stay, for the rest of his life. "He maintained a solid physique into old age, which he demonstrated when he threw a stubborn cigar-smoker off a non-smoking street car at the age of 79." Edgar Allen Poe called him "among our men of indisputable genius" but none of his books are now in print.
Posted by Ned Beauman at 11:12 am 1 comment: 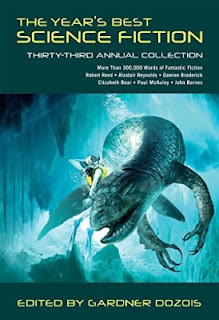 My story "It Takes More Muscles to Frown", originally from the MIT Technology Review's special issue Twelve Tomorrows, has been included in an anthology published this week as The Year's Best Science Fiction: Thirty-Third Annual Collection in the US and The Mammoth Book of Best New SF: 29 in the UK. This is a series I read for years before I became a writer so it's exciting to be part of it.
Posted by Ned Beauman at 9:26 am No comments: