Boxer, Beetle now has an awesome Hollywood-type teaser website, designed by the unbelievably capable Dan Rees-Jones, where you can read the characters' letters, medical records, deleted emails etc. Meanwhile, the book isn't officially out until Thursday, but it's pretty easy to purchase right now: if you're in London there are copies in (for instance) Lutyens & Rubinstein and Pages of Hackney, or otherwise Amazon.co.uk and Play.com are already posting it out.
Posted by Ned Beauman at 11:40 am 2 comments:

I've uploaded the bibliography for Boxer, Beetle. I did nearly all my research in the London Library, without which the book couldn't possibly have been written; but I should also mention here the writer James Sturz, who was generous enough to invite me to his apartment in New York to look through his old notes for his 1993 New York Times article on the Nazi memorabilia trade.
Posted by Ned Beauman at 10:48 pm No comments:

"During the Gay Nineties, Europe sent us beef and brawn to tamp railroad ties on our section gangs. Since the World War, she has sent us brains and culture – to be filtered into American life through the crude screens of Hollywood studios. There are more than four thousand White Russians hanging around Hollywood – Cossack generals running cafés... chief of staff of a great Russian fleet baiting his hooks from a San Pedro fish boat... art critics who were known the length and breadth of Europe fussing with the decorations on studio sets – the architect who built the German government buildings in the Camaroons, designing gangster dives... barons, grand dukes, counts who have commanded Imperial boy-guards taking orders from assistant directors who were corporals.

Europe has sent us also a ragged fringe – fakers, slickers, imposters. A war correspondent of some celebrity who had invaded royal palaces to sit with kings said that the only potentate who really over-awed him was a Cincinnati tailor masquerading as a Romanoff, bumming free board at hotels. Meanwhile, the Austrian grand duke who was real was sleeping on the sand at Santa Monica with his devoted and unpaid valet – starving until he found a way to get one square meal a day by his promise not to expose the 'Commander of His Imperial Majesty's Household Troops, Sir,' as a servant in an officers' mess."

"Gilke's relentless sense of integrity could at times be excessive. PG Wodehouse, who left Dulwich [College] in the year of [Raymond] Chandler's arrival, remembered the Master as the sort of man who would approach him after a good cricket performance and say 'Fine innings, Wodehouse, but remember we all die in the end.'"

"There would be an intense blackout scene involving amnesia and usually alcohol in every one of Chandler's Marlowe novels, as well as in one of his Hollywood screenplays. In fact, the blackout scene became a distinct trademark of Marlowe's adventures. These scenes were given such prominence and space throughout Chandler's writing that they beg at least two clear biographical correlations. First the German bombardment that left Chandler unconscious during the First World War and ended his infrantry career. Second, the blackouts that he experienced when he drank heavily; specifically, the sustained binge he embarked on at Dabney's.

There are of course other, less subtextual, reasons why Chandler may have detailed so many blackouts. Like other serial heroes, Marlowe must fight villains, but he can never die. One way in which his survival could retain any sort of credibility is for him to receive regular non-fatal blows. That said, few action writers can ever have given the head injury so much attention, or lavished upon it as much imagery, as did Chandler."
Posted by Ned Beauman at 2:22 pm No comments:

In his book The Dream Endures, Kevin Starr mentions a San Francisco chef called Tao Yuen who "had been trained before the Revolution at the Imperial School of Cookery in Peking where the textbook was the 753-volume, three-million-page Imperial Encyclopedia of National Cookery." I can't find any other reference to this entity, but there's something a bit Borgesian about a cookbook so demonically comprehensive that you'd starve to death long before you even got to the end of the marinades – "The Book of Sand" in particular comes to mind, plus, as ever, "The Library of Babel". Scattered through the Encyclopedia, presumably, are recipes that have not yet been read for dishes that have not yet been invented using ingredients that have not yet been discovered. Talking of Borges, it's good to see Christopher Nolan confirm in this interview that one inspiration for his breathtakingly enjoyable Inception was "The Secret Miracle", which I was reminded of often during the film.
Posted by Ned Beauman at 10:20 am 1 comment: 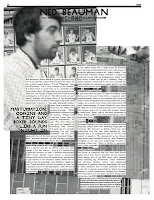 There's a page on me and my book in this month's Dazed & Confused. Meanwhile, the first finished copies have just arrived. 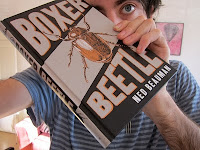 "Most notoriously, on March 13, 1919, a letter purporting to be from the [New Orleans] Axeman was published in the newspapers saying that he would kill again at 15 minutes past midnight on the night of March 19, but would spare the occupants of any place where a jazz band was playing. That night all of New Orleans's dance halls were filled to capacity, and professional and amateur bands played jazz at parties at hundreds of houses around town. There were no murders that night."
Posted by Ned Beauman at 3:39 pm 1 comment: