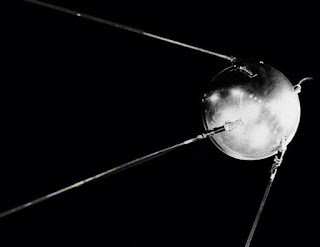 from Sputnik: The Shock of the Century by Paul Dickson

Of the many bits of speculation as to the next Russian move, none was quite so dramatic as that of John Rinehart of the Smithsonian Astrophysical Observatory in Cambridge, Massachusetts: “I would not be surprised,” he said, “if the Russians reached the moon within a week.” Feeding the fear was the fact that nobody really knew what Sputnik was doing up there or at first even what it looked like… Even Sputnik’s simple beep bought confusion… The CIA, Defense Intelligence Agency, Army, Air Force, and other Western intelligence worked around the clock to see who would be the first to decipher the beeps. The assumption had been that important data were coming back from space. Some went out on a limb. Columnist Stewart Alsop suggested on October 13 that the Soviets had actually put a reconnaissance satellite in orbit. “There is a mounting body of evidence, taken most seriously in the Washington intelligence community, that the Soviet satellite is not blind,” he wrote, “that Sputnik has eyes to see.” Finally, one of the Russian IGY delegates in Washington revealed that there was no code and the satellite could not see. The one-watt, battery-operated transmitter was placed inside the aluminum shell simply so that it could be tracked.
Posted by Ned Beauman at 2:32 pm No comments: 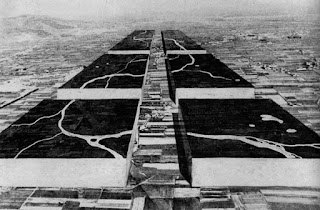 “In and around the years when the first photographs of the Earth were taken from space, speculative architectural design was inspired by the visual scale of the whole Earth as a comprehensive site condition, and spawned scores of now-canonical megastructure projects. Many proposed total utopian spaces (islands cut off from the world, per Fredric Jameson’s discussion of the utopian genre in sci-fi), including The Office for Metropolitan Architecture [OMA]’s Voluntary Prisoners of Architecture (1972) and Superstudio’s planet-spanning Continuous Monument (1969), while others sought the utopian through the maximal perforation of boundaries by ludic interfaces and absolute grids, including Archizoom’s No-Stop City (1969) or Constant’s New Babylon (1959-1974)… The merger of cities into planetary-scale conglomerations was imagined, among others, by Constantine Dioxiadis as Ecumenopolis, a single planned urban form across the whole world, and Paolo Soleri as Arcology, enclosed megacities rising into the lower atmosphere, so large they constituted their own ecosystems… They provide a link between the grandiose progressivism of high modernity (such as the massive Karl-Marx-Hof in Vienna, a neighbourhood-sized building from 1930 holding over 1,300 apartments) and ideas for extra-planetary colonies on Mars (dating at least to the late nineteenth century and perhaps best articulated in their political complexity by Kim Stanley Robinson’s Mars trilogy, 1993-1999)."

from "Cloud Megastructures and Platform Utopias" by Benjamin H. Bratton
Posted by Ned Beauman at 12:08 pm No comments: 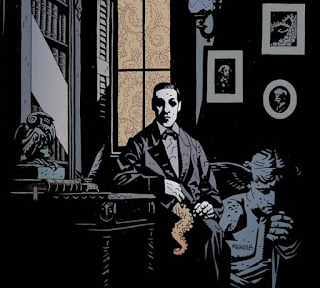 Over the weekend I had an essay in the Guardian about the centenary of my favourite novel, Ford Madox Ford's The Good Soldier, and its resonances with the work of HP Lovecraft.

I should note here that the essay was heavily informed by Thomas Ligotti's brilliant The Conspiracy Against the Human Race, but the paragraph where I acknowledged him was cut. I wouldn't want to be accused, like True Detective, of cribbing from Ligotti without attribution!
Posted by Ned Beauman at 9:36 am 5 comments:

"Fowler of Brooklyn has grafted with skin from the back and abdomen of a frog. The patient was a coloured boy of sixteen, who was extensively burned by a kerosene lamp. The burns were on the legs, thighs, buttocks and right ankle, and the estimated area of burnt surface was 247.95 square inches. The frog skin was transferred to the left buttocks, and on the right buttocks eight long strips of white skin were transferred after the manner of Thiersch. A strip of human skin was placed in one section over the frog skin, but became necrotic in four days, not being attached to the granulating surface. The man was discharged cured in six months. The frog skin was soft, pliable, and of a reddish hue, while the human white skin was firm and rapidly becoming pigmented."