"I have indeed sometimes thought that now that the House of Lords must inevitably in a short while be abolished, it would be a very good plan if the profession of literature were by law confined to its members and their wives and children. It would be a graceful compensation that the British people might offer the peers in return for the surrender of their hereditary privileges. It would be a means of support for those (too many) whom devotion to the public cause in keeping chorus girls and race horses and playing chemin de fer has impoverished, and a pleasant occupation for the rest who by the process of natural selection have in the course of time become unfit to do anything but govern the British Empire. But this is an age of specialization and if my plan is adopted it is obvious that it cannot but be to the greater glory of English literature that its various provinces should be apportioned among the various ranks of the nobility. I would suggest, therefore, that the humbler branches of literature should be practised by the lower orders of the peerage and that the barons and viscounts should devote themselves exclusively to journalism and the drama. Fiction might be the privileged demesne of the earls."

"carry the question farther back, but leave it still more obscure"

Today I found an interesting example of a sense lost for words – by which I mean a concept that it was once possible to express in English in one word but isn't any longer.

How would you say "bear fruit" or "pay off" or "yield results" or "benefit me" in just one word? You could say "succeed" or "flourish", but that doesn't quite capture the sense of an endeavour producing some dividend that is separable from the endeavour itself.

The OED's historical thesaurus has a section called "be advantageous or beneficial [verb (intransitive)]". Under this category, we find: dow, frame, freme, help, hold, gain, yain, it is speedful, profit, vail, speed, prow, boot, prevail, avail, mister, skill, stead, conduce. That's in chronological order of their earliest citation, from c. 950 for "dow" to 1624 for "conduce". Of those nineteen, seventeen are marked as obsolete or archaic.

That leaves only "boot" and "avail". I was unfamiliar with "boot", but apparently you can say, for instance, "It boots thee not to be compassionate." (That's from Richard II, which I studied for A-level, so at some point I must have learned this meaning of "boot", and subsequently forgotten it.)

(A lovely aside in the OED about the etymology of "boot": "An early but dubiously genuine use appears under booty adj., which, if really used by Lydgate c1430, would carry the question farther back, but leave it still more obscure.")

That leaves "avail." We all know "it was of no avail" or "I availed myself of some biscuits". But here are some citations for "avail" from the OED under "intr. To be of value, profit, or advantage."

The first and third I cannot interpret. The second uses "avalyth hyt" i.e. "it avails" which is no advance on "it boots". And the fourth actually reads to me like Disraeli is using "avail" as a noun instead of a verb. So there are no citations that really show how "avail" could be used in the context of "the experiment availed" or "my efforts did not avail". Until I find one, "avail" is out.

Which leaves no word in the English language that does this job!

That is strange to me. Of course there are plenty of things for which English once had a word but the word died. But I expect most of them are obsolete behaviours or ideas. There can't be many gaps like this, where for some reason we abandoned the ability to express such a basic concept in one word, and never regained it.

As a writer, why do I care?

Firstly, because there are some sentences where the rhythm simply insists on one word instead of two. So if I can't use just one word there, I have to restructure the whole sentence.

Secondly, because the two-word substitutes aren't always viable. "Yield results" is clunky and formal; "benefit me" brings along a pronoun that isn't necessarily welcome; and "bear fruit" and "pay off" both have a tinge of metaphor, which can interfere with other metaphorical content in the sentence.

I'd like to advocate that we bring back "profit" as it was once used. Today, if you said "the experiment profited", people would be waiting for an object at the end of that sentence, because they're not used to hearing "profit" used as an impersonal intransitive. But the old sense of "profit" is there in the dictionary, long slumbering but still fit for duty. I'll finish with this excellent citation:

1658 J. Rowland tr. T. Moffet Theater of Insects in Topsell's Hist. Four-footed Beasts (rev. ed.) 1119 But for nauseating that ariseth from worms, and gnawing of the stomach, a grain of salt held in the mouth, and melted and swallowed down, profits wonderfully.
Posted by Ned Beauman at 2:10 pm 1 comment: 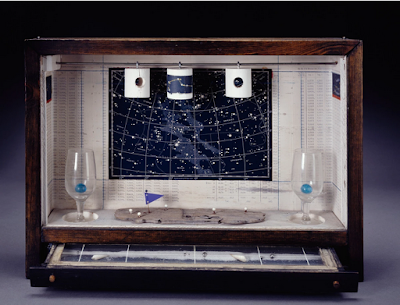 At the Royal Academy yesterday I found myself quite moved by Joseph Cornell's Untitled (Celestial Navigation). The work is about levels of abstraction – not abstraction in the sense of non-figurative art, but abstraction in the sense that a map is an abstraction of a terrain (unless those are the same thing?) At the most abstract, we have the balls in the glasses: a binary value, like voltage in a memory cell. (Either the glass has a ball in it or it doesn't. Other works in the same series include some empty glasses.) Then the numbers in the back of the cabinet, which may be astrological tables. Then the star chart. Then the flags and pushpins on the length of driftwood, which are indicators, not quite objects in themselves. And finally the drawer at the bottom, which, with its ridge of sand, bears the closest resemblance to an actual landscape, except that the little spheres and cones scattered around still feel more symbolic than real.

But all these levels of abstraction live together in the same box. Hierarchy is forgotten. Examining it, I was reminded of Max Tegmark's mathematical universe theory, which proposes that "our external physical reality is a mathematical structure." In other words, there is no very profound difference between a constellation and an astrological table, because the constellation is itself just numbers. This seems to me exactly the argument of Untitled (Celestial Navigation). Of course, Cornell died too long ago to have heard of the mathematical universe theory – or the computational universe theory, or the simulation hypothesis, or the holographic principle, or any other modern heterodoxy that suggests reality might have its foundations in a realm much more abstract and depthless than the one we think we see. But here, in 1958, that intuition is felt.

Then again, when I went to the Cy Twombly Gallery in Houston, I became adamantly convinced that Twombly's paintings are about the process of evolution by natural selection – even though they have titles like Bay of Naples and Say Goodbye Catullus, to the Shores of Asia Minor. So it's possible I'm a bit too preoccupied with science when I look at art.
Posted by Ned Beauman at 11:58 am 1 comment: 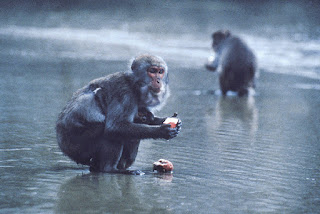 In sweet-potato washing, dirty tubers were dumped by the researchers on the beach for the monkeys to eat, and Imo, a 1.5-year- old female, invented a technique of cleaning the potatoes by washing them in the stream nearby. The food-processing technique spread to her peers, their siblings and their mothers, but not to adult males, who ignored these (childish?) acts. As the spud-scrubbers matured and had offspring, the mothers passed on the habit to their youngsters, in orthodox downward vertical transmission.

Similarly, 4 years later, Imo invented wheat sluicing, in which mixed handfuls of wheat and sand were thrown into the sea. These cereals, too, had been provided by the researchers. The sand sank, the grain floated, and the wheat could easily be skimmed off the surface, this was much more efficient and less gritty than picking up grains of wheat one by one from the beach...

Western comparative psychologists and other critics continue to be dismissive of the cultural achievements of Japanese macaques.

from The Cultured Chimpanzee by William Clement McGrew
Posted by Ned Beauman at 9:58 am 1 comment: 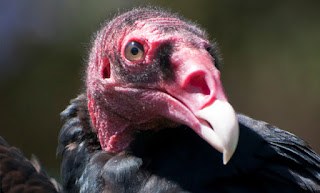 "Stager was told how in the 1930s [the Union Oil Company of California] had noticed that leaks in natural gas pipelines attracted turkey vultures. The gas contained ethyl mercaptan (aka ethanethiol), a substance that smells like rotten cabbage (also responsible for the smell of bad breath and flatus); it is also released from decaying organic matter, including animal bodies. Union Oil therefore added higher concentrations of mercaptan to the gas to help them locate leaks."

from Bird Sense by Tim Birkhead
Posted by Ned Beauman at 1:54 pm 1 comment: