Snakes are recommended in five counties as intermediate agents or recipients of the very affliction they cause – snakebites – evidently on the theory that they are immune to their own poison. “To treat a snakebite,” a Shelby cure says, “kill the snake by cutting off his head. Place the body of the snake against the wound to draw out the poison.” A symbolic ritual is outlined in a Dallas example: “Catch the snake and cut him into small pieces. Build a fire and burn each piece one by one for a sure cure.” An even stranger remedy from Harris says to “cut up the snake and eat the meat raw.”

from “Magical Transference of Disease in Texas Folk Medicine” by John Q. Anderson

If you or someone you are with is bitten by a snake you should not try to catch or kill the snake.

from "Snake bites - Treatment" on the NHS website
Posted by Ned Beauman at 12:24 pm No comments:

In the 1870s a young Pole in Paris named Henry Romeike watched an excited artist buy two dozen copies of a newspaper in which there was a favorable notice of his recent exhibit. Disturbed by this squandering of papers and yet aware that everybody likes to see his name in print, Romeike started a new business – the world’s first press-clipping bureau…

The agencies do not claim infallibility. The 100 or so girls in a large agency who flip and mark pages at breath-taking speed seven hours a day sometimes make mistakes. Most of these arise from the interesting fact that the girls do not really read – they glance, their eyes alert for certain key words. Cartoonist John Held, for example, once received a startling clipping head “STAGE DOOR JOHN HELD BY POLICE.” Another time a dairyman interested in milk production drew “PARI-MUTUELS MILK GAMBLERS.”

Why do people subscribe to press-clipping bureaus? Strangely enough, Henry Romeike’s original observation that everybody likes to see his name in print accounts for only 10 percent of all clippings, according to the manager of one large New York bureau. Publicity today is more than a matter of satisfying vanity; it is good business. Consequently, insurance agents are interested in fires, a tombstone maker has highly practical interest in obituaries, stores or homes struck by lightning are “leads” for the man who sells lightning rods, and makers of electrical appliances seek all the items they can find about careless souls who started fires with kerosene.

One of the most unusual orders was placed by a Detroit father who wants clippings derogatory toward the theater. He is trying to discourage his daughter, a would-be actress…

It may be of interest to note that women work out better than men in the clipping bureaus, where each worker must cover the equivalent of four Gone with the Wind’s each day. The trouble with men is, they get bored – and begin to read the news.

from "When Clippings Tell The Tale", The Rotarian magazine, October 1950

I also find, in yesterday’s mail, that I owe Henry Romeike, Inc. 220 West 19th Street, N.Y., sixteen dollars for clippings, and as I have no dollars and Mr. Romeike, who is I believe by his own admittance the original Romeike, is very lovely about sending clippings, I wonder if you could have this sixteen dollars sent to him and charged to what must be rapidly becoming my account.

from a letter from Ernest Hemingway to Maxwell Perkins, 21st August 1926
Posted by Ned Beauman at 12:49 pm No comments: 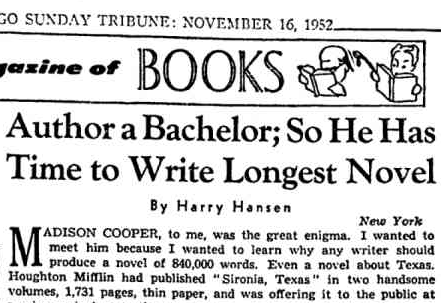