"Of the first twenty-five [Doges of Venice], according to the chroniclers, three were murdered, one was executed for treason, three were judicially blinded, four were deposed, one was exiled, four abdicated, one became a saint and one was killed in a battle with pirates."
"It was essential to the Venetian system that any citizen showing signs of self-importance or dangerous popularity should at once be humiliated, to prevent the emergence of dictators and pour encourager les autres. If you refused a command, you were disgraced. If you lost a battle, you were impeached for treason. If you won it, and became a public hero, you would probably be charged, sooner or later, with some trumped-up offence against the State. The fifteenth-century general Antonio da Lezze, for example, defended Scutari for nearly a year against Turkish assaults so ferocious that a cat, stealing out one day across an exposed roof-top, was instantly transfixed by eleven arrows at once, and so sustained that afterwards the expended arrow-shafts kept the place in firewood for several months; but when at last he surrendered the city to overwhelmingly superior forces, and returned honourably to Venice, he was immediately charged with treason, imprisoned for a year and banished for ten more. In Venice a great commander was always a bad risk, and he was seldom left for long to enjoy his gouty retirement."
"In 1649 a Venetian doctor offered the State an 'essence of plague' to be spread among the Turks by infusing it into textiles sold in enemy territory: the Republic did not use his invention, but to prevent anyone else getting hold of it, instantly locked the poor man up in prison."
All from Venice by Jan Morris. This book is a good demonstration of why I do not believe that a novel in which nothing happens is more "true to life".
Posted by Ned Beauman at 3:20 pm No comments:

Here is a podcast about zines I hosted at Dazed Live. I'd never hosted anything before and the panic is audible in my voice for about the first fifteen minutes but then I really got into it.
Posted by Ned Beauman at 10:05 am No comments:

From Michael Sorkin's Twenty Minutes in Manhattan:
"The failure of [modernist] planning is not in its effort to be comprehensive or to equalize access to necessary facilities. It is, rather, the attempt to rationalise choice on the basis of a homogeneous set of subjects, a fixed grammar of opportunities, a remorseless segregation of uses, and a scientistic faith in technical analysis and organisation that simply excludes diversity, eccentricity, noncomforming beauty, and choice. The utopian nightmare."
Boxer, Beetle, summarised.
Posted by Ned Beauman at 8:15 pm No comments:

"During a party in Weimar in the winter of 1785, Goethe had a late-night conversation on his theory of primary colours with the South American revolutionary Francisco de Miranda. This conversation inspired Miranda, as he later recounted, in his designing the yellow, blue and red flag of Gran Colombia, from which the present national flags of Colombia, Venezuela and Ecuador are derived."
Posted by Ned Beauman at 3:37 pm No comments: 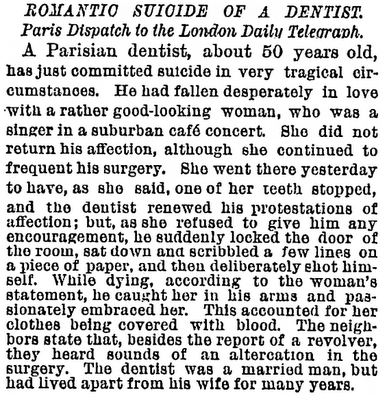 Some talks I'm doing near my flat this month

Saturday 9th April: with Jamie Shovlin at Dazed Live in the Tramshed, Shoreditch

Saturday 16th April: at the symposium for The Nature of Change: Hybridity and Mutation in the Old Truman Brewery, Shoreditch
Wednesday 20th April: with Hugh Frost of Landfill Editions at Land of Kings at the Print House Galler, Dalston
Posted by Ned Beauman at 9:39 am No comments: