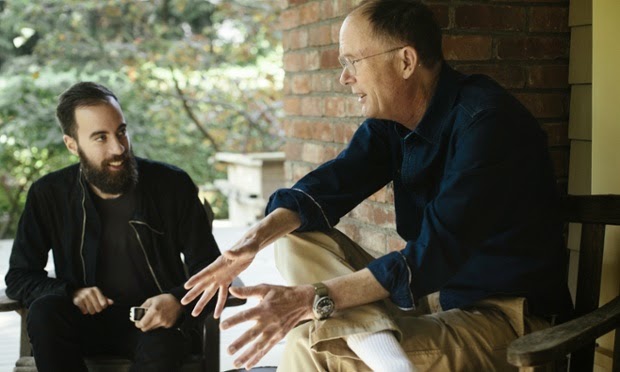 I spent most of September working on two long profiles, both of which have come out this weekend. First I went to Berlin to interview Olafur Eliasson for the New York Times' T magazine. Then I went to Vancouver to interview William Gibson for The Observer.

And for completeness' sake, while I'm here promoting my journalism, it occurs to me that I never put a link on this blog to my essay for Aeon about Donald Judd.

Here is a section that I very regretfully had to cut from the William Gibson piece for reasons of space:


Gibson has described the internet as a component of our 'global, communal prosthetic memory'. In that spirit, I didn't bother to ask him very much about his personal history, because he detailed it so comprehensively in a 2011 Paris Review interview which is available for free online. All the same, he did tell me one fascinating story about his past that I'd never come across in the dozens of interviews with him that I'd read (although I've subsequently discovered from Google, our most dependable prosthesis, that he has mentioned it in the course of at least one public event).

First, some background. One of the most rewarding qualities of Gibson's work is the thoroughness and precision with which he describes inanimate objects. You might think of Gibson as the poet of the virtual, but really he's always been much more about the actual. If fiction strives, as James Wood puts it, 'to open the pores of our senses and feel the world', I'll take Gibson over nearly any author of so-called 'realist' literature. We live among objects, and it's still through objects that the future creeps up: today a cheap smartphone or a polyethylene running shoe, tomorrow a vat-grown hamburger or a 3D-printed sniper rifle. If a writer reserves his or her best prose for faces and landscapes and weather and other pretty things that have always looked the same, he or she is giving only the vaguest account of real life, compared to the exceptional tangibility of Gibson's work.

'When I started,' Gibson told me, 'I had a list of what I regarded as deficiencies in genre science fiction. There was a story I read – I have no idea who wrote it – where the character looks out of the porthole of a spaceship and sees a prone figure wearing “silver boots”. And those “silver boots” made me so mad. Were they tarnished sterling? Were they Vegas lamé? Just the laziness of it. I thought, “This is one of the reasons the other writers don't take us seriously.” If it was worth doing this ridiculous thing of imagining what the future might be like, it was worth doing it less fuzzily.' (At this point I must apologise for referring inadequately to my 'dictaphone' in an earlier paragraph. It was in fact a Chinese-made Olympus WS-110 digital voice recorder dating from the first generation iPod era when plastic in a hospital shade of white was briefly a signifier of advanced technology.) 'Something else that fed into it,' Gibson went on, 'was a kind of political awareness that everything in the human universe was made by a person, or by a machine that had been made by people. And there also may be, I sometimes suspect, a kind of borderline autistic fascination with objects. Not everyone shares it, but there's much more of it evident now on the internet than was previously evident in the world, so I feel less odd about having it.'

Tracing this tendency back, he told an innocuous story which practically made my jaw fall off when I heard it because it seemed to explain so much about the work of one of my favourite living writers. 'The only writing teacher I ever had was in a high school composition class and he was someone he wrote contract specifications for the US military. He talked a lot about his job, and about how if he didin't describe the thing exactly, and then it arrived and it went wrong, the Pentagon was stuck paying for it. He would have us do exercises describing a wooden pencil to that standard.'

Ernest Hemingway spoke fondly of his time as a cub reporter at the Kansas City Star, where the official style guide instructed him to 'use short sentences. Use vigorous English. Eliminate every superfluous word.' To me, Gibson's story about the high school teacher is equally revelatory. Of course, it's not the whole picture: Gibson would not have found that class so stimulating if he had not had a preexisting interest in squinting at objects through the loup of prose, just as Hemingway would not have gone for that newspaper job if he had not had a preexisting interest in getting manly deeds down on paper with a minimum of fuss.

Nevertheless, to use a Gibson phrase, it's a 'nodal point' in his biography – not only because of the writing exercise itself, but also because the teacher was working for the Pentagon. One of the constants of his work is that we live in a sort of military surplus society, where military technologies, methodologies and philosophies are forever leaking into civilian life.
Posted by Ned Beauman at 2:02 pm 1 comment: