The website of The White Review have just published my essay on the philosophy of Quentin Meillassoux.
Posted by Ned Beauman at 4:09 pm No comments:

I'm pleased to announce that Boxer, Beetle has been awarded the Foundation for Jewish Culture’s Goldberg Prize for Outstanding Debut Fiction by the Jewish Book Council.
Posted by Ned Beauman at 4:06 pm No comments: 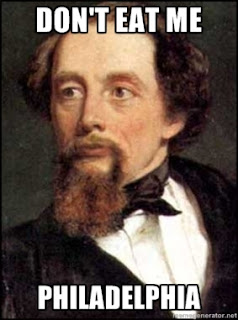 Just now I was on the OED website looking up 'sleep' in the sense of 'this house sleeps five' when I came across this menacing citation:

1848    J. R. Bartlett Dict. Americanisms (at cited word),   She could eat fifty people in her house, but could not sleep half the number.

And that led me to an old American usage of 'eat' with which I was previously unfamiliar and of which every single example made me laugh:

Admittedly, the third of those is a deliberate pun, although not, as you might think, a pun about cannibals: Doesticks (the humorist Mortimer Thompson) was staying in an Irish boarding house so plagued with mosquitoes that his hostess had 'nearly fulfilled the latter clause [i.e. to "eat us"] by proxy'.
Posted by Ned Beauman at 10:35 pm 2 comments:

"Experiments in reducing language to its barest elements have been the topic of countless studies of Samuel Beckett, which are all in their own ways right in pointing out his dearth or resources at this period and a kind of despair in the face of a language so tired that traditional metaphor, rhetoric, and even normal grammar cannot be effective any more... In Beckett criticism there is a tendency to admire experimentation and reduction for their own sake; but I think it is difficult to assent to the idea that Ping, for example, adequately rewards the labour needed to winkle out its withered kernels. In recogition of Beckett's minimalism, it is not enough to recall Shelley's words from 'On Life': 'How vain it is to think that words can penetrate the mystery of our being! Rightly used they can make evident our ignorance to ourselves, and this is much.'... Shelley and Beckett are both suggesting that language helps us to perceive what is true only by ruling out what is not... Modernist orthodoxy notwithstanding, it is by no means a gain for a work of art that it should trace the difficulty involved in making it... It is, in short, justifiable to the reader to react to the short texts in much the same way Beckett reacted as maker."

from The Ideal Real: Beckett's Fiction and Imagination by Paul Davies
Posted by Ned Beauman at 9:16 pm No comments: