In all the coverage of Iceland's banking crisis, I haven't seen anyone mention that Iceland has won more gold medals (9) than any other country in the annual World's Strongest Man competition. Perhaps they can get their economy back on track by concentrating on the export of tremendously muscular fisherman.

Incidentally, here is an amazing song by the Pudzian Band, the band founded by current World's Strongest Man Mariusz Pudzianowski. It's a lot more eurotechno than you'd expect.
Posted by Ned Beauman at 10:59 pm No comments: 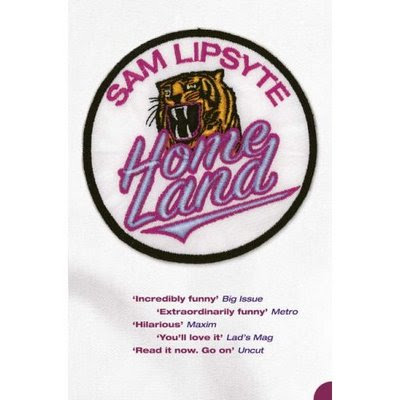 1. You're a young male American novelist and you've written a book about someone who's bored of his life - it's conversational, flippant, obsessed with its own contemporaneity - people will like it because it's theoretically a worthwhile literary novel and yet it takes absolutely no mental effort to read or understand. But you've left no place for actual human feeling. So you crowbar in a dead or dying mother. This happens in Bright Lights, Big City by Jay McInerney, Microserfs by Douglas Coupland, Home Land by Sam Lipsyte, and doubtless many others I've forgotten. Enough! It's so fake!

(Admittedly, I did enjoy all three of those books quite a lot.)

2. The front cover of my paperback edition (above) has the following quote:

No one at HarperPerennial noticed there was still uncorrected dummy text on the front cover?

Posted by Ned Beauman at 2:31 pm No comments: