"He looks out of her windows. There was a time - the year after leaving, five years after - when this homely street, with its old-fashioned high crown, its sidewalk blocks tugged up and down by maple roots, its retaining walls of sandstone and railings of painted iron and two-family brickfront houses whose siding imitates grey rocks, excited Rabbit with the magic of his own existence. These mundane surfaces had given witness to his life; this chalice had held his blood; here the universe had centred, each downtwirling maple seed of more account than galaxies. No more. Jackson Road seems an ordinary street anywhere. Millions of such American streets hold millions of lives, and let them sift through, and neither notice nor mourn, but fall into decay, and do not even mourn their own passing but instead grimace at the wrecking ball with the same gaunt facades that have outweathered all their winters. However steadily Mom communes with these maples, the branches' misty snake-shapes as inflexibly fixed in these two windows as the leading of stained glass, they will not hold back her fate by the space of a breath; nor, if they are cut down tomorrow to widen Jackson Road at last, will her staring, that planted them within herself, halt their vanishing. And the wash of new light will extinguish even her memory of them. Time is our element, not a mistaken invader. How stupid, it has taken him thirty-six years to begin to believe that."

From Rabbit Redux. Downtwirling! I know a lot of people prefer their fiction about mortality as French as possible, but for me nothing beats Updike.
Posted by Ned Beauman at 3:02 pm No comments: 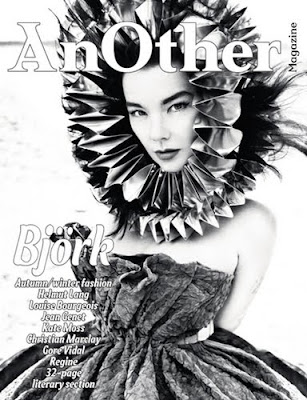 On the cover of the hefty new issue of AnOther magazine you'll find Björk looking stunning in a Bea Szenfeld paper headdress, and inside you'll find my essay on the Voyager Golden Record, which I had a very enjoyable time researching and writing.
Posted by Ned Beauman at 11:30 am No comments: 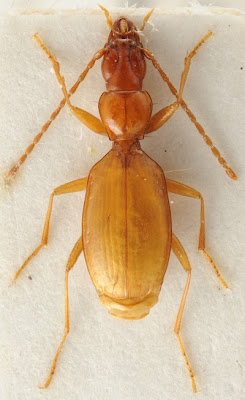 I'm a bit embarrassed to admit that, despite all the research I did for Boxer, Beetle, I never bothered to find out what Anophthalmus hitleri looks like in real life. But Natascha Geier, a producer for the German TV channel NDR, is far more diligent than me, and retrieved the photo above from the Zoologische Staatssammlung München. As you can see, it looks nothing like the beetle on the cover of the book, and also nothing like the beetle I describe in the text – disappointingly unintimidating, in other words.

By the way, since Boxer, Beetle has just got the last print review it's likely to get until the paperback comes out, here is a reminder that I have been compiling all the reviews – and of course by 'all the reviews' I mean short, representative extracts from all the favourable reviews and shorter, unrepresentative extracts from all the unfavourable ones – in this post.
Posted by Ned Beauman at 12:20 am No comments:

"Far from reducing the violence [in Los Angeles' early years], the police at times contributed to it, as on the memorable occasion when the city marshal (also the city dogcatcher and tax collector) got into a shootout with one of his own officers at the corner of Temple and Main after a dispute over who should receive the reward for capturing and returning a prostitute who had escaped from one of the city's Chinese tongs."

from LA Noir by John Buntin
Posted by Ned Beauman at 5:42 pm No comments:

As I mentioned before, Rebecca Hunt and I are doing a reading and Q&A next Wednesday at my literary agency's bookshop, Lutyens & Rubinstein in Notting Hill. It starts at 6:30 for 7, tickets are £5, you get a glass of wine, and you can buy a signed copy of either book at a discount. Email anna@lutyensrubinstein.co.uk to reserve a ticket, or go into the shop.