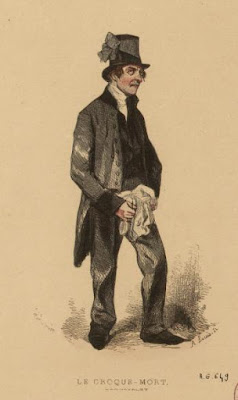 An amusing dispute arose in Paris (1913), where the croque-morts [undertaker] is still of some importance in municipal service. It appeared that the City Fathers had received many complaints as to the unshaven and unkempt appearance of these officials supplied by the Department; the matter was solemnly debated, when it was realized that on their slender stipend such relatively expensive matters as hair-cutting and shaving could hardly be insisted on with any show of justice. On the other hand, it was decided that there was reason for the complaints of the citizens, whose petition was suitably acknowledged; forthwith it was decreed that these functionaries should be trimmed into respectability at the City's expense. That their dishevelled locks, a recognized sign of grief, should be thus trimmed off them, showed a want of knowledge of the history of funeral practices, for the Romans much prized such tokens of the abandonment of despair, and even Biblical injunctions are not wanting.

Certain barber establishments in the city were commissioned to tend the croque-morts free of charge – then the storm broke! That one citizen should be thus favoured with municipal patronage whilst others were neglected cut at the most cherished traditions on which the Republic is based. The neglected barbers rose to a man and demanded a fair share of the trade. "Give tickets to the croque-morts," they demanded, "that they may extend their patronage to whom they will, rather than encourage a pampered minority." And so the matter was settled.

Even this equitable arrangement was found to have its drawbacks in practice, owing to a regrettable tendency on the part of the croque-morts to sell their tickets and go unshaven as before.
Posted by Ned Beauman at 5:43 am No comments: