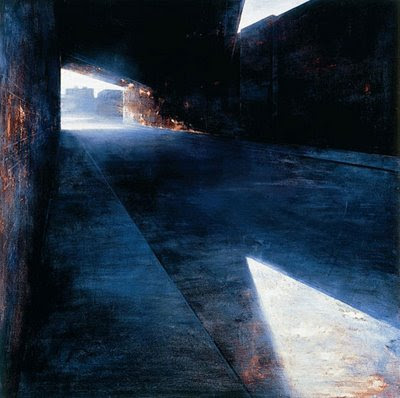 I love this artist Nina Murdoch who has just won the Threadneedle Figurative Art Prize.
Posted by Ned Beauman at 12:11 pm No comments:

For several months I've been obsessed by this sentence from an interview with Philip Roth:

"... it feels to me very much like a dying moment, for literary culture in my own country – but you can't have computers and iPods and BlackBerries and blueberries and raspberries, and have time left to sit for two or three hours with a book."

Two or three hours! Then today, provoked by that sentence into reading Roth himself (The Ghost Writer) over dinner instead of watching Mad Men as usual, I see this:

"He did not do justice to a writer unless he read him on consecutive days and for no less than three hours at a sitting. Otherwise, despite his notetaking and underlining, he lost touch with a book's inner life and might as well not have begun. Sometimes, when he unavoidably had to miss a day, he would go back and begin all over again, rather than be nagged by his sense that he was wronging a serious author."

Here is a table that appears in Reactionary Modernism by Jeffrey Herf, derived from the pre-WW2 writings of the German economist Werner Sombart. Let's imagine it's a quiz from a magazine.

Mostly A's: You are the Jewish Geist.
Mostly B's: You are German technology.

Although I'm half-Jewish, I think I prefer forest to desert and use value to exchange value. But, on the other hand, I do prefer abstraction to concrete immediacy, reason to instinct, intellect to soul, and - perhaps decisively - international socialism to National Socialism.

You certainly don't get much sense from Werner Sombart's Wikipedia page that he was in fact a fairly committed anti-Semite who even disliked department stores because he thought their "crass juxtapositions" were a product of Jewish sensibilities.
Posted by Ned Beauman at 7:12 pm No comments: