The best things I ate recently during five weeks in Thailand

This is my number one. I spent time in Ubon Ratchathani and Khon Kaen, two towns in Isarn province in north eastern Thailand, because I wanted to eat Isarn food, and specifically I wanted to eat laap ped, or spicy minced duck salad. (This is a very thorough explanation of laap.) At Somtum Jinda I had the best laap of my life, far better, even, than any of the other laaps I ate in Isarn. Although 'salad' is the consensus translation of laap into English, most of the time it feels like an awkward misnomer; this dish, however, really did feel like a wonderful salad, in the sense of a carousel of distinct ingredients whirling across your tastebuds. On another night I had a curry of fish belly with fish eggs, which was almost as good.

Although I went all over Ubon Ratchathani in search of laap, Somtum Jinda was directly opposite my hotel – clearly, a higher power led me to this restaurant. They even have a menu in English, which is surprising: no Western tourists come to Ubon Ratchathani, because there isn't really anything to see or do there. And that's the problem with a recommendation like this – realistically, none of you are ever going to go to Ubon Ratchathani. But if for some reason you do, you must eat here. 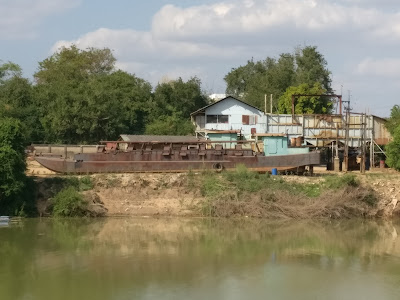 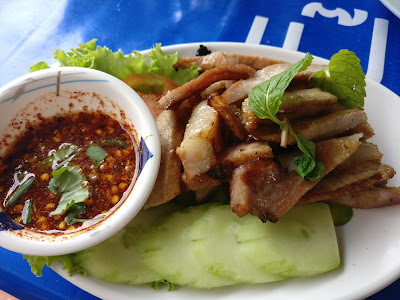 There may be no better place to eat the classic Isarn lunch of grilled chicken, som tam (papaya salad), and sticky rice. And on weekends, they also serve kor moo yang (grilled pork neck, above). Mark Wiens has written about this place on his useful website Eating Thai Food. Everything was superb, including the chilli dip – in Khon Kaen they serve a dip that tastes a lot like a Mexican chipotle en adobo, so it presumably must involved smoked chillis. If you ever go to Khon Kaen – again, there's no reason why you would apart from the food, but I don't know, perhaps you'll get embroiled in some baroque scheme to accumulate air miles which requires you to fly to Khon Kaen – and you want to eat kor moo yang, but it's not the weekend so they're not serving it at Gai Yang Rabeab, I can recommend a restaurant on the main drag with the straightforward name of Kor Moo Yang Khon Kaen.

Can I note at this point that I am not a person who takes photos of all my food? Only when I have a hunch that it's going to be amazing. 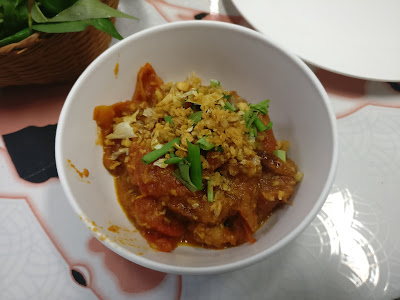 The best thing I ate on my prior trip to northern Thailand, a year ago, was the nam prik ong (spicy pork and tomato dip) at at a little place called Sorn Chai which I heard about from Robyn Eckhardt's blog EatingAsia . But I was there on my first day in Thailand, and at the time I couldn't be quite sure that the sheer exhilaration of being back there wasn't distorting my judgement. So on this trip I went as far as to book a hotel near Sorn Chai, and block out a whole day on my calendar, for the express purpose of verifying this nam prik ong. (Obviously it didn't take a whole day, but I just couldn't leave anything to chance.) And it was just as good as I remembered. In fact, if not for Somtum Jinda, this would have been the best thing I ate in Thailand for the second year in a row (which would have been pretty boring, so I'm especially grateful for that laap).

Khao soi is egg noodles in yellow curry sauce with beef or chicken. There are certain khao soi places in Chiang Mai that come up again and again, and this isn't one of them, but I think it's my favourite I've had there. This has apparently been featured on the recent Netflix series Somebody Feed Phil, BUT I WENT BEFORE THAT AND I CAN PROVE IT. 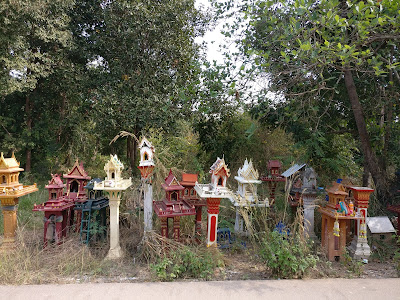 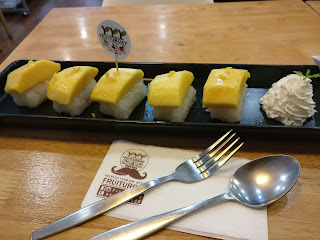 I don't think I've ever eaten a dish that was such blatant Instagram bait, but to be honest with you I really enjoyed it.

Kuaytiaw reua, better known as boat noodles, are rice noodles with meatballs in pork broth. This is one thing I never realised about Thai street food before spending time in Thailand – on the whole, Thai people are not eating pad thai, tthey are not eating green curry, they are not eating anything you've ever eaten in a high street Thai restaurant – they are eating boat noodles. Boat noodles everywhere. In a lot of places you see as many boat noodles stalls as you see all other kinds of stalls put together. In practical terms, boat noodles is the national dish of Thailand. And yet it hardly exists in the west. Personally, I'm not a big boat noodle guy, but I think this one is the best I've ever had.

Bak kut teh at Ko Ti Ocha in Hat Yai 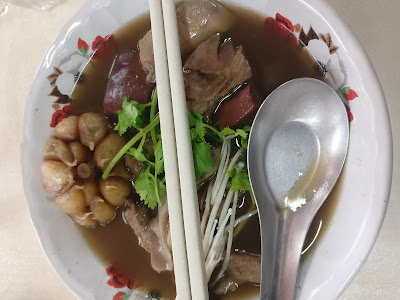 Bak kut teh is pork rib stew. Yes, that is an entire head of garlic in the bowl. This might be a good place to note that Hat Yai was my 'discovery' of the trip. As with Isarn province, almost no western tourists go there, but I found it an enchanting place: it's the fifth biggest city in Thailand, and the closest major city to the Malaysian border, which makes it very multicultural, 40% Muslim but also full of Chinese influence. If you've ever been to Penang, it's quite similar – not as beautiful, but almost as stimulating to walk around. And the food is spectacular. This, characteristically, is a Malaysian-Chinese dish, which I heard about from Austin Bush's Thai Eats map. 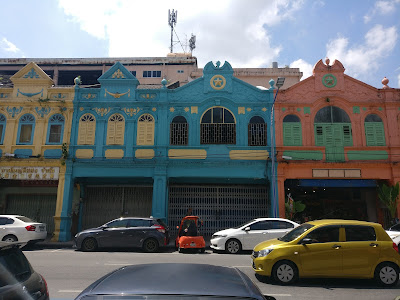 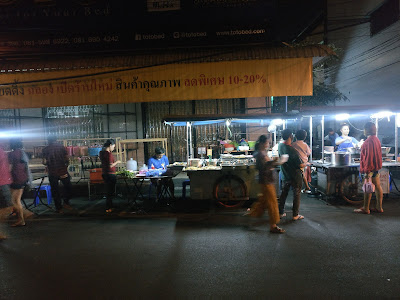 Thailand is full of khao gaeng – rice and curry – shops, but this is the only one I've ever been to that operates as a buffet. They give you a plate and you can just serve yourself anything you want! My hands were shaking I was so intoxicated with possibility! I suspect it's down to the Malaysian influence, because the only other self-service curry place I've eaten at in south east Asia was in Penang. I went here twice and everything I tried was fantastic. It's only open after dark, and it's on Google Maps under its Thai name ข้าวแกง5โค้ง – just copy and paste that if you want to find it. 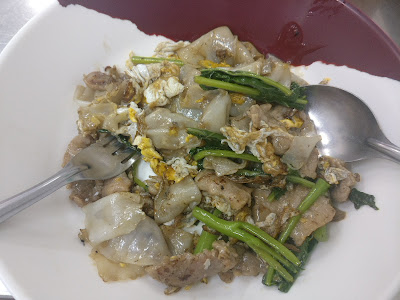 Pad si ew is flat rice noodles stir fried with pork, egg and Chinese kale. I read about this place on Taste of Bangkok, and I think it was the best thing I ate all week. You can't tell from the unflattering photo above, but somehow it looked like something you'd get served in a Michelin-starred restaurant, and it tasted like that too. It cost 40 baht, or 91p, and the place wasn't even busy. Bangkok is an extraordinary place.

This is only available on Mondays and Fridays. The texture of the goat meat was just uncanny, like they'd put it through some kind of experimental matter transmuter from Star Trek. More about this on Eating Thai Food. 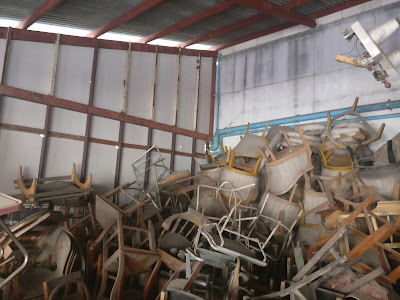 Extremely good. More about this on Eating Thai Food.

Also extremely good. I read about this on Leela Punyaratabandhu's blog SheSimmers. It's only open for breakfast and early lunch.

This is the closest thing I've ever tasted to a perfect mango sticky rice, although I wasn't able to compare it to the nearby Sor Boonprakob Panich because that was closed for Chinese New Year. More about this on Streetside Bangkok. The first time I tried to go, around lunchtime, they'd already sold out, so go early. I cannot recommend making the trek out to the much-praised Maewaree, which I found unexceptional. This is an illustration of the perverse and Sisyphean reality of being a 'foodie': when I first visited Thailand, I was thrilled by any random mango sticky rice from Chatuchak Market, but now half the time I just feel mild disappointment at the pudding's faults. What a way to live. 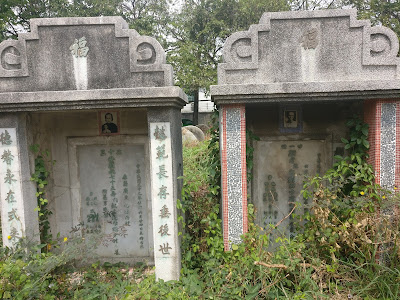 Until I ate at this stall in Chinatown, I'd thought of satay as something you only ever eat in situations when you wish you were somewhere else having a real dinner: the canapés are coming round at a boring launch party, or you're in an awful central London bar with an 'Asian' menu. But here I learned that satay can be a remarkable thing. I came across it using Wongnai, the Thai version of Yelp.

I queued for almost an hour to eat the famous pad thai at Thipsamai. Yes, it was impeccable, but the thing is, there are neighbourhood places you can eat a pad thai which is almost as good and you don't have to wait at all. One of them is Orawan, which I read about on Streetside Bangkok.

This wasn't on the level of what I ate in Hong Kong and Macau in January, but it was still pretty great. More about this on Eating Thai Food. 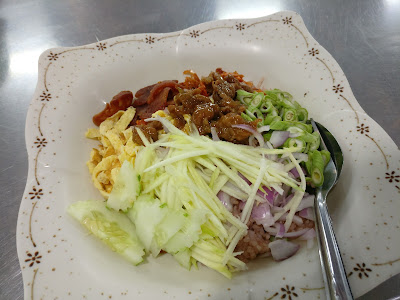 There was no one thing at this market that would have made this list on its own. But if you eat 1. a couple of curries at Khao Gaeng Ruttana, 2. saikrok pla naem (pork sausage with fish powder) at Mae Lek, 3. khao kluk kapi (fried rice with shrimp paste) at Sonthaya, and then 4. kanom gluay (banana cake) at Nanta, you may find yourself, as I did, almost tearfully grateful for the sheer beneficence of Thai cuisine. Three of those four are listed on BK.

Most days in Thailand, my breakfast would be something wrapped in a banana leaf from a street vendor. I say 'something' because I don't speak Thai, so the contents were a surprise every single time; sometimes it would just be sweetened sticky rice; sometimes, best of all, it would be sticky rice with coconut milk and banana; once it was full of tiny sardines cooked with chilli and herbs; once it was just a wad of seasoned raw pork mince! (I was told by a nearby Thai person that although you're normally expected to put one of these in a microwave, you can, if you want, just eat it raw; so I had a taste, but it wasn't delectable enough for me to take the risk of eating the whole thing. After that I learned to check that the banana leaf was darkened by steaming or grilling.) I wish all breakfasts could involve unwrapping a mystery. 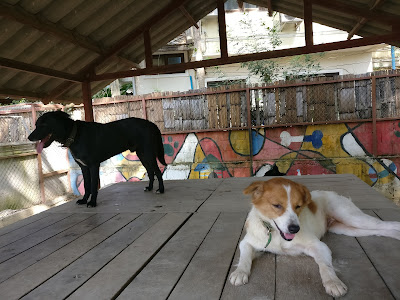