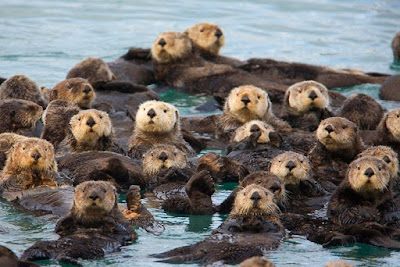 "In total, 357 sea otters were captured and delivered to rehabilitation facilities. Of these, 123 died in captivity. Thirty-seven of the 234 survivors were judged unsuitable for return to the wild and were transferred to aquaria and other permanent holding facilities; 25 of these animals were still alive 10 months later. The remaining 197 survivors were released by August 1989, 45 of them with surgically implanted radios. Twenty-two of the instrumented animals were dead (11) or missing (11) the following spring, thus indicating relatively low post-release survival of the captured and treated animals.

"Some otters captured for rehabilitation were unoiled, and others were so lightly oiled that they may have fared better if left in nature to their own devices. About 70% of the animals brought to the rehabilitation facilities were determined to be uncontaminated (61), lightly oiled (123), or of unknown status (68). Finally, rescue efforts probably caused some mortality in and of themselves because otherwise healthy captive sea otters suffer a 5 to 10% stress-induced mortality rate under the best of circumstances.

"Capture and rehabilitation costs for sea otters alone was $18.3 million. Assuming that 222 otters were saved (the maximum possible), costs exceeded $80,000 per animal."

from "Catastrophes and Conservation: Lessons from Sea Otters and the Exxon Valdez" by James Estes
Posted by Ned Beauman at 11:04 am