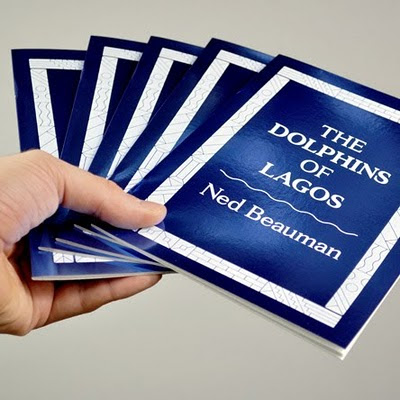 That's the first line of my short story "The Dolphins of Lagos", which has just been published in a gorgeous limited edition of 200 with shiny blue covers by Hugh Frost at Landfill Editions. Buy it here for £4 + P&P. I think it may be the first piece of fiction I've ever written without some sort of forlorn romantic angle, but don't let that put you off: it does have pirates, dolphins, submarines, Xbox games, hoisin sauce and Chatroulette, and it's set in Peckham where I used to live. Also, I don't write many short stories, and this one won't appear in any other form for several years at least, so if you enjoyed Boxer, Beetle and you want to read any more fiction from me before The Teleportation Accident comes out in 2012, this may be almost your only opportunity. (If you didn't, and you don't, then it will still look nice in your house.)
Posted by Ned Beauman at 3:53 pm