Boxer, Beetle is now out in paperback. Also, next Saturday I will be appearing briefly on BBC2 as part of a Culture Show special about new novelists.
Posted by Ned Beauman at 4:50 pm 1 comment: 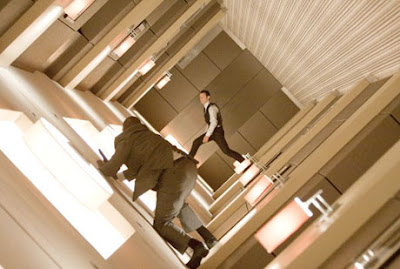 "References are something of a speciality for me": on recording an amateur DVD commentary for Christopher Nolan's Inception (2010)

My three favourite cultural experiences of 2010 (that involved leaving the house) were 1. Punchdrunk and ENO's The Duchess of Malfi, 2. Mountain Man at St. Augustine's Tower and 3. Inception at IMAX. I love Inception. I spent a lot of time last year thinking about Inception, reading about Inception, writing about Inception, and talking about Inception, mostly with my friend Bea, who loves it as much as I do. And on the DVD of Inception, there's no audio commentary by Christopher Nolan, so last week Bea and I decided to record one of our own. In the annals of audio commentaries recorded by people who were not themselves involved in the making of the film, can it take its place alongside, for instance, Peter Bogdanovich on Citizen Kane? Well, I haven't heard that one, so for all I know, yeah, maybe.

Or maybe not. We hadn't really prepared, and although Bea and I both have quite a lot to say about Inception, the film is 142 minutes long, and we definitely don't have 142 minutes of insights about Inception. We have, on a generous estimate, 20 minutes. So, like real life, the commentary is mostly composed of pauses, repetitions, banalities and digressions. Other problems here include my mis- and over-use of words like "materiality" and "Borgesian" in an attempt to justify this project with respect to my status as an aspiring public intellectual; Bea's insistence, based largely on the presence of Leonard DiCaprio, that Inception is a sort of crypto-sequel to Titanic; my own forlorn determination to prove, with frequent but vague references to certain personal misfortunes in the period of the film's release, that Inception is the greatest break-up film since Swingers; Bea's intense but ambivalent relationship with the feminist conceptual framework of her Film Studies MA; the cocker spaniel barking in the background; and so on.

Oh, wait, have I inadvertently make it sound fantastic? Forget that.

Anyway, we had fun doing it. And next time, we'll do better. (What film shall we pick? I vote Cloverfield, another Hollywood blockbuster that made cry and probably shouldn't have.) Do we seriously think anyone will listen to the whole thing? Well, maybe. For example, you may recently have thought to yourself, "I am on the internet and I would like to lose all my remaining respect for '20-something hipster novelist' Ned Beauman, but I can't just look at his Twitter feed, which is the usual method, because he's not on Twitter – what shall I do?" In that case, this is your lucky day. I suggest you put on your DVD of Inception, turn the sound down, pause it at 0:00:01, download this file, start both simultaneously, and join Bea and me as, like Mal and Cobb, we wander aimlessly through the unpopulated landscape of our own minds.

Posted by Ned Beauman at 9:00 am No comments: