“Seen a lady in here, buddy? Tall, pretty, brown hair, in a print bolero jacket over a blue crepe silk dress. Wearing a wide-brimmed straw hat with a velvet band.”

There was a tall girl standing there waiting for the car. She had brown wavy hair under a wide-brimmed straw hat with a velvet band and loose bow. She had wide blue eyes and eyelashes that didn't quite reach her chin. She wore a blue dress that might have been crepe silk, simple in lines but not missing any curves. Over it she wore what might have been a print bolero jacket.

We never actually do find out why Waldo has such an eye for ladies' fashions. The narrator's hunch is just left dangling. I don't think it matters, though, because Chandler is making a self-referential point about his craft: noir writers like him do have a strange, almost obsessive-compulsive tendency to pick through every little detail of a character's outfit when that character is introduced. He must have thought it was strange himself, because he acknowledges that here, but he must have thought it was necessary, too, because he kept doing it.

Last week I finished The Power Broker, Robert Caro's 1974 biography of Robert Moses. I started reading it because there is a character in my forthcoming novel Boxer, Beetle loosely based on Moses, but of course I wouldn't have spent 18 months getting through a 1,200 page book just to research a minor character unless the book had been rewarding in its own right. In fact, it is not just one of the best books I've ever read, it's probably one of the most rewarding experiences of any kind I've ever had in my life. There are a tremendous number of things I would like to say about it, but for the moment I'm just going to link to this great, lengthy conversation between Caro and Kurt Vonnegut from 1999. It includes an anecdote about how, when Caro had trouble getting Lyndon Johnson's brother Sam Houston to be frank about his early life, he took him back to a precise replica of his boyhood home that was maintained by the National Park Service, sat him down in his accustomed seat at the dining room table, and got him talking! Now that is journalism. And also quite creepy.
Posted by Ned Beauman at 6:08 pm No comments: 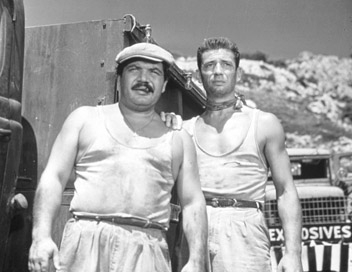 1. Those two (above) are called Mario and Luigi. What are the chances? Unfortunately, the one who looks like Super Mario is called Luigi, and the one called Mario looks like no particular video game character that I'm aware of.

2. The film has a lot in common with Roger Vailland's existentialist novel 325,000 Francs, from three years later. Both are about men who are willing to take banal but incredibly dangerous jobs with big companies for the promise of a better life. But in the end, I think, they're not about dangerous jobs in particular, or even globalised corporate exploitation, but just the very notion of paid work: the sheer horror, the sheer agony, of being trapped for the rest of your life in a room, with strangers, doing something meaningless. Loss of limbs, which takes place in both, is just a metaphor for the loss of your youth and your optimism. I think we can take it that French guys in the 50s did not go to the office with a spring in their step and a song on their lips.

3. The town in which the first hour of the film is set could almost be the same one as in Cyril Connolly's underappreciated only novel, The Rock Pool (1936) - a provincial outpost of purgatory.

4. There is a scene in The Wages of Fear where a driver can't let his speed drop below 40mph or his vehicle will explode. Why might that be familiar?

"In general, I think it can be said that most sections of the United States were first populated by failures. They are usually referred to as 'pioneers', but that euphemism doesn't dispose of the fact that they were doing very badly where they were, and pulled up stakes to see if they couldn't do better somewhere else."

'On August 1970, [One New York Plaza] suffered a fire in which two people were killed and 35 injured. The deaths were caused after an occupied elevator was "summoned" to the burning floor when one of those thermally-activated call buttons - designed to react to a warm finger tapping it - reacted instead to the heat of the fire on that floor.'
Posted by Ned Beauman at 5:49 pm No comments: