Above: Erasistratus the Physician Discovers the Love of Antiochus for Stratonice by Benjamin West (1772)

"By the time of Erasistratus, the celebrated Greek physician and anatomist (300-250 B.C.), we find very definite attempts to detect deceit and these, interestingly enough, appear relatively objective in method (i.e., feeling the pulse). One such attempt is related by Plutarch and others. It concerned the love of Antiochus for his step-mother, Stratonice, and his efforts to conceal it from his father, Seleucus I of Syria, surnamed Nicator.

"Nicator, formerly a general in the conquering army of Alexander the Great, had married the beautiful Stratonice. Sometime after this marriage, Nicator's son (of a former wife), Antiochus, began to lose weight and to languish in an unknown disease. Nicator, whose associations with Alexander the Great had made him familiar with Alexander's respect for learning, decided to patronize learning himself and to look about for a capable physician who could cure his son's ailment. He called to his court Erasistratus, who had gained renown for his discussions of the functions of the brain and nervous system.

"When Erasistratus arrived at the court he acted on the current suspicion that Antiochus may have developed a consuming passion for the beautiful woman his father had married. In discussing with Antiochus the virtues of Stratonice he found occasion to feel Antiochus' pulse, and its tumultuous rhythm made him sure of his suspicions. Consequently Erasistratus informed the monarch that Antiochus was infatuated by Stratonice. Indeed, significant circumstantial evidence was to support this diagnosis: the second Stratonice was begotten of the intimacies of Antiochus and the Queen."

from "A History of Lie Detection" by Paul V Trovillo

But when Father Brown is told about a "pulsometer" in G.K. Chesterton's story "The Mistake of the Machine" (1914):

"'What sentimentalists men of science are!' exclaimed Father Brown, 'and how much more sentimental must American men of science be! Who but a Yankee would think of proving anything from heart-throbs? Why, they must be as sentimental as a man who thinks a woman is in love with him if she blushes. That's a test from the circulation of the blood, discovered by the immortal [William] Harvey; and a jolly rotten test, too.'"
Posted by Ned Beauman at 11:36 pm No comments:

From my favourite book about art, Seeing is Forgetting the Name of the Thing One Sees: A Life of Contemporary Artist Robert Irwin by Lawrence Weschler:

Bob had been headed south from Paris toward Morocco, when, passing through Barcelona, he first heard about Ibiza, a small island off the Spanish Mediterranean coast. He continued to North Africa, but several weeks later, for no particular reason — it was cheap, it was warm, it was said to be peaceful — he ventured out to the dry, barren island. In subsequent years Ibiza (pronounced “E-be-tha” by native Castilians) became known as something of an artist’s colony, a winter resort, but during the season Irwin spent there, it was still utterly remote. On the edge of a barren peninsula, Irwin installed himself one day in a small rented cabin and then did not converse with a soul for the next eight months.

Today, when he talks about it, he can’t explain why it happened. It just did, gradually, this distancing of himself from the world: the night walks in Paris, the North African desert, and then, by an ineluctable process, this season on Ibiza.

He does recall how it felt: “It was a tremendously painful thing to do, especially in the beginning. It’s like in the everyday world, you’re just plugged into all the possibilities. Every time you get bored, you plug yourself in somewhere: you call somebody up, you pick up a magazine, a book, you go to a movie, anything. And all of that becomes your identity, the way in which you’re alive. You identify yourself in terms of all that. Well, what was happening to me as I was on my way to Ibiza was that I was pulling all those plugs out, one at a time: books, language, social contacts. And what happens at a certain point as you get down to the last plugs, it’s like the Zen thing of having no ego: it becomes scary, it’s like maybe you’re going to lose yourself. And boredom then becomes extremely painful. You really are bored and alone and vulnerable in the sense of having no outside supports in terms of your own being. But when you get them all pulled out, a little period goes by, and then it’s absolutely serene, it’s terrific. It just becomes really pleasant because you’re out, you’re all the way out."

He had brought along a pad and some drawing supplies, but he did not use them. Instead he just sat on a rock, isolated. "I mean, there were people," he clarifies, "but they were simply not people. They were just part of the landscape. These people were from another world, another time, fishermen in broken-down barks, farmers scraping the scrabbly ground. We had nothing in common, certainly not language – there was no contact. There was this outcropping, and then the Mediterranean carving up the pumice below, and inland some forests, fir trees. You ate whatever the fisherman took in that day. Time became kind of unreal."

He thought about less and less. Finally he just thought about thinking. No longer calibrating his thoughts in terms of a social reality, in terms of how he would have to square them with the realities of the world, he almost stopped thinking in terms of language. There was a slow purification of thinking; he speaks of arriving at pure ideas, stripped of any worldly ambitions or motives.

"Ideas, when they get like that," Irwin explains, "then you can really get into the game of reason. You can really sit down and reason the nature of what you are thinking. When you peel all those layers away and you arrive at just the qualities of the ideas themselves, it becomes very clear and very simple as to what they are what they are and do what they do. Then, later, when you bring back in the motives and the aspirations and the rationales, you can begin to see how they in turn alter the ideas."

He stayed through the winter, an unseasonably cold winter endured without hot water or heating. The months passed. Spring arrived. One evening, walking into the nearby village, he saw a poster for Singin’ in the Rain — in Technicolor with Gene Kelly. The screening was due to begin in just a few minutes in the town’s tiny, creaky, old theater. He walked in, was suffused for an hour and a half with the sound sets and palm trees of Southern California. “That broke the spell!” He left, walked back to his stucco cabin, packed his gear, and was gone the next morning. A week later he was back in Los Angeles.
Posted by Ned Beauman at 5:43 pm No comments: 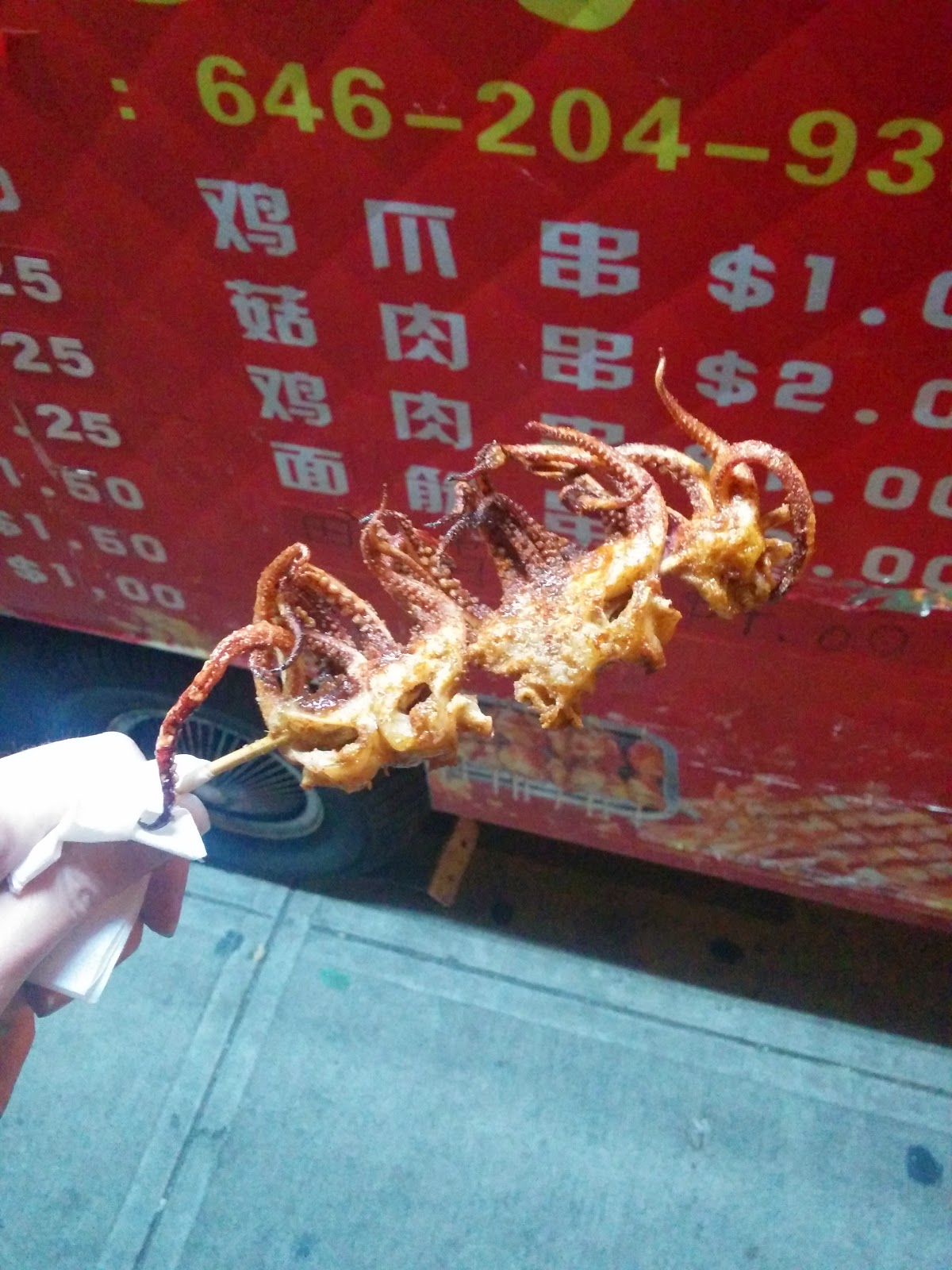 I am not the world's most empathetic person. On the empathy scale I'd put myself about level with Ultron. Sometimes I think there may only be one situation in life where I am really capable of feeling pain on behalf of another human being. And that's when a friend of mine goes to New York for a week and they don't eat very well. That is a tragedy that can haunt my conscience for months afterwards.

It's especially poignant to me because it's so easily averted. No tourist in New York need ever eat badly. (Money no object! On a budget of $20 a day you can eat the best food of your life if you tramp the 7 line in Queens.)

With that in mind, I feel it may be time to present my findings from the many long visits to New York I've made over the past few years. Here is the Google Map I've made.

The trouble is, I have a real collector's mentality about restaurants, meaning I tend to visit each place only once, and the next time I want to try somewhere new. However, for me, recommending a restaurant based on one visit is horribly unscientific and irresponsible, because my enjoyment of any given meal has so much to do with who I'm with, who's paying, how much I've had to drink etc. (Footnote: perhaps those factors don't affect professional restaurant reviewers. But I do believe that you simply don't know very much about a restaurant and its food if you've only eaten there once. That's why I find it hard to take seriously any inspection less rigorous than the New York Times' critics', because they eat a long series of meals, or even, in one famous case, two meals simultaneously.)

So in the following recommendations I'm giving priority to businesses I've patronised two or more times.

Here are some more bars that I've found to be reliable fall-backs in their respective neighbourhoods, listed roughly in order of how close they got to making it on to the previous list:

And here is a short list of bars that I've only been to once but that made such a pleasant impression on me that I'm willing to recommend them all the same:

On to food. If you said to me, 'Ned, I'm spending a week in New York, please tell me where I should eat in order to experience the best of what the city has to offer (limiting your recommendations, of course, to restaurants you've visited at least twice, because this isn't some sort of happy-go-lucky free-for-all)' I would supply the following list, which has a strong bias towards Asian food, because that's what I'm into:

And if you said to me, 'Ned, I'll permit you to trample over every empirical principle you hold dear and name some restaurants that you've only visited on a single occasion but nonetheless feel prepared to endorse on that basis as among the finest of their kind' this is what you would get:

Of all the restaurants that I have emblazoned with the royal seal here, the only ones that I'd characterise as expensive are The Dutch, La Vara, Prime Meats and Momofuku Ssam Bar. The rest are moderate or cheap (although if you are really determined to throw your money around, a few will permit that in fine fashion). Anyway, everything's on the Google Map. If you use it, please email me and tell me what you thought.
Posted by Ned Beauman at 2:20 am No comments: