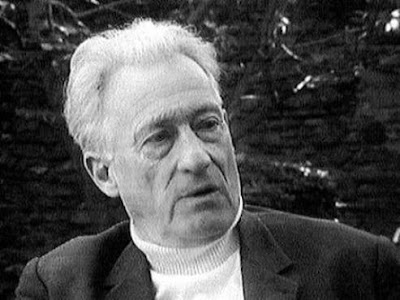 "For [this] view of language... an examination of signs reveals a terrible reality. Whether letters, words, images or sounds, signs are rigid, glacial, and abstract in a peculiarly menacing way. Furthermore, they are harbingers of death. A great portion of their importance lies in the fact that they demonstrate an intimate connection between words and death, between human consciousness and deadly acts: breaking, killing, suicide. In this perspective, all signs are bad signs, threats – and weapons. This accounts for their cryptic nature, and explains why they are liable to be hidden in the depths of grottoes or belong to sorcerors (Georges Bataille evokes Lascaux in this connection). Signs and figures of the invisible threaten the visible world. When associated with weapons, or found amidst weapons, they serve the purposes of the will to power. Written, they serve authority. What are they? They are doubles of things. When they assume the properties of things, when they pass for things, they have the power to move us emotionally, to cause frustrations, to engender neuroses. As replicas capable of disassembling the 'beings' they replicate, they make possible the breaking and destruction of those beings, and hence also their reconstruction in different forms. The power of the sign is thus extended both by the power of knowledge over nature and by the sign's own hegemony over human beings; this capacity of the sign for action embodies what Hegel called 'the terrible power of negativity'. As compared with what is signified, whether a thing or a 'being', whether actual or possible, a sign has a repetitive aspect in that it adds a corresponding representation. Between the signified and the sign there is a mesmerising difference, a deceptive gap: the shift from one to the other seems simple enough, and it is easy for someone who has the words to feel that they possess the things those words refer to. And, indeed, they do possess them up to a certain point – a terrible point. As a vain yet also effective trace, the sign has the power of destruction because it has the power of abstraction – and thus also the power to construct a new world different from nature's initial one. Herein lies the secret of the Logos as foundation of all power and all authority; hence too the growth in Europe of knowledge and technology, industry and imperialism."
Posted by Ned Beauman at 2:45 pm

Hi Ned, thought I'd just let you know that I talk a bit about the experience of reading the first chapter of BB on The Guardian website and then immediately going out to buy the book over at my fledgling and humble blog A Writer, He Muttered should you wish to eyeball it. Regards, NV