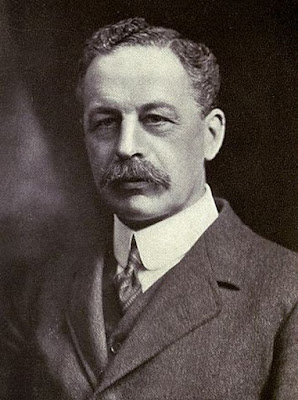 Sir Halford Mackinder, one of the founders of the London School of Economics, executes several porters during an expedition to Mount Kenya in 1895

Mackinder ‘practised with my Mauser in the afternoon against a tree trunk' and kept discipline within his own group of porters by regularly shooting off rounds from his gun. The 'moral suasion of my Mauser'  was for Mackinder an effective physical representation of the social contract on safari: '[i]t was a strange experience to be thus brought face to face with the ultimate sanctions of society'. Mackinder regularly rejected pleas from his porters to stop for the day with the observation that: “[i]n the interests of discipline I determined that my will must prevail'. When Mackinder refused to stop, he noted that the whole body of Kikuyu porters tried to desert, and were only checked by a display of firearms. His notebooks recorded that 'Cam[pbell Hausburg and the Swahili] Sulamani got ropes for a chain gang, I walked about with a loaded revolver, the Swahilis exhibited some 50 firearms, and at length we got the Washensi [Kikuyu) into line.' Another show of force accompanied negotiations for food with a village chief: 'our Swahilis cleaned their rifles ostentatiously and drilled one another.' Elsewhere, a village Chief, Ngombe, was kidnapped and held hostage until their food needs were met. A brother of Ngombe, Wangombe, killed two Swahilis who had been sent on another food foray. '[M]uch against natural impulse', Mackinder refrained from retaliating since he was not sure he had better than 'demoralised forces and, after all, [w]e were a scientific expedition, and had reached the scene of our work.'

In addition to the two murders and the death from dysentery, at least eight other porters were 'shot by orders'. We know this by the list supplied by Hausburg to the Zanzibar company, from which Mackinder had hired the Swahilis.

Mackinder's own journey down from the mountain, after the exhilaration of the final assault on the summit, was equally desperate. He had twenty-five African men (fourteen of the Swahilis from Zanzibar, an interpreter and two tent boys hired at Mombasa, and eight Kikuyus hired from Kikuyu Fort Smith) and four Europeans with him. During this part of the journey he reflected that 'I could not help comparing the Swahili to a human camel'. Mackinder had to cope with porters who, to conserve their strength, threw away part of their load. He ordered twenty lashes for one Swahili who had thrown away a bottle of specimens in spirit', adding that there was 'an epidemic of this'. On another day, two men collapsed and had to be 'forced to continue', and Mackinder said that the day had been spoiled by the sick man'. He recorded that he 'did not like this slave driving, for that is what it really was.'

His two alibis at this point were local custom and necessity: ‘[i]t was all done according to the dasturi (= custom) of the African safari, and we could not stay, for supplies were running short.' His threats perhaps escalated for he noted that the 'Swahili [...] did not cling to life'. A few days later, he found that three-quarters of the botanical specimens had been thrown on the fire to save carrying them further. This time he ordered a number of kiboko (lashes with a leather whip) unspecified, uniquely, in the typescript but given in the notebooks as thirty, the highest recorded. The lashings were for Musa, a Swahili who could speak French and that Mackinder trusted with a gun despite his not having been hired as a soldier, or askiri. Mackinder felt betrayed, referring to the culprit with surprise as 'the trusted Musa'. Musa was one of the porters recorded as 'shot by orders'.

On arriving at Naivasha, Mackinder telegrammed his wife that he would get back to Marseilles on 14 November, and this was in fact when the other Europeans got there, but the day after sending the telegram, Mackinder instead began a furious dash to the coast and arrived in Marseilles on 29 October. He was surely eager to get back to Oxford since he was in dereliction of his academic duties but, perhaps, he recalled the small print of the contract for hiring the porters. It allowed that in ‘a case of “grave emergency" ’, the leader of the caravan might go beyond flogging to whatever was required by the safety of the caravan or the members of the caravan”. However, it also reserved the right that ‘a competent Court may be called upon to decide whether (the leader had] improperly exercised their discretion'.

from Geopolitics and Empire: The Legacy of Halford Mackinder by Gerry Kearns
Posted by Ned Beauman at 12:29 pm